New York hardcore pioneers AGNOSTIC FRONT have announced a co-headlining tour with SICK OF IT ALL. The 19-date trek will begin on April 23 in Boston and will make stops in Toronto, Chicago and Houston before concluding in Syracuse, New York on May 15.

AGNOSTIC FRONT's Roger Miret comments: "Really excited to kick off this tour with our NYHC peers SICK OF IT ALL!!! It’s been a long time coming and now is the time to bring some classic NYHC to the East Coast!!! See you in the pit."

SICK OF IT ALL's Armand Majidi comments: "Following-up on our sold-out NYC borough tour together, we're very excited to announce the 2020 AGNOSTIC FRONT/SICK OF IT ALL U.S. East Coast tour. It's always great to play with other classic New York bands, and AGNOSTIC FRONT almost wrote the American hardcore handbook, so this will be extra special. When two of the kings of New York come to your town, it's gonna be clobberin' time with the godfathers of hardcore, so be a part of it and help keep this movement buzzing into the new decade!"

AGNOSTIC FRONT's twelfth studio album, "Get Loud!", was released in November through Nuclear Blast. The disc was produced by Miret, while longtime friend Paul Miner handled the recording, mixing and mastering of the record at Buzzbomb Studio in Orange, California. For the artwork, the band returned to 1986's "Cause For Alarm" artist Sean Taggart. It features the iconic "Cause For Alarm" characters combined with a modern freshness.

SICK OF IT ALL's twelfth studio album, "Wake The Sleeping Dragon!", came out in November 2018 via Century Media. The follow-up to 2014's "The Last Act Of Defiance" was produced by Jerry Farley (EVERY TIME I DIE, DEMON HUNTER) over a two-and-a-half-week period at Nova Studios in Staten Island, New York and was mixed and mastered by Tue Madsen (MESHUGGAH, THE HAUNTED, MADBALL). The cover artwork was created by Ernie Parada. 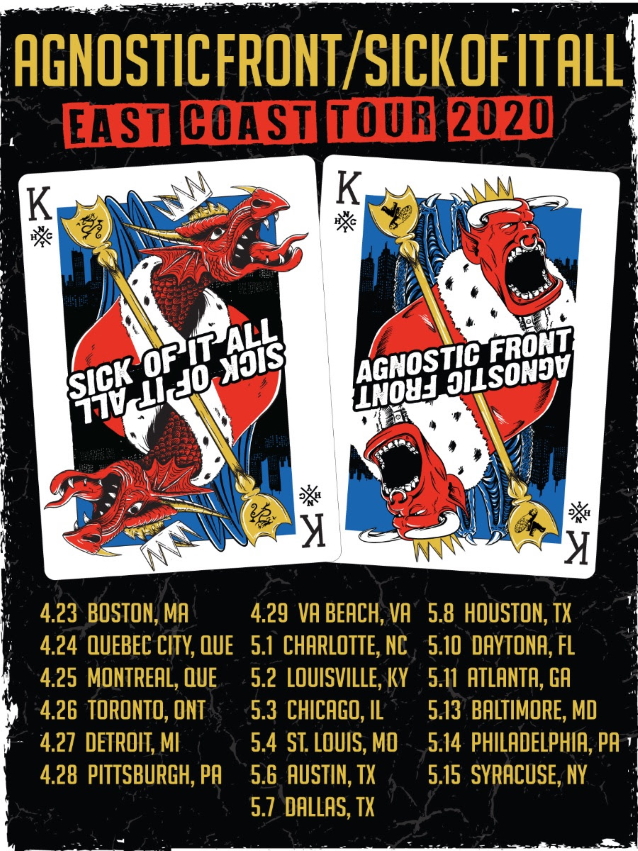