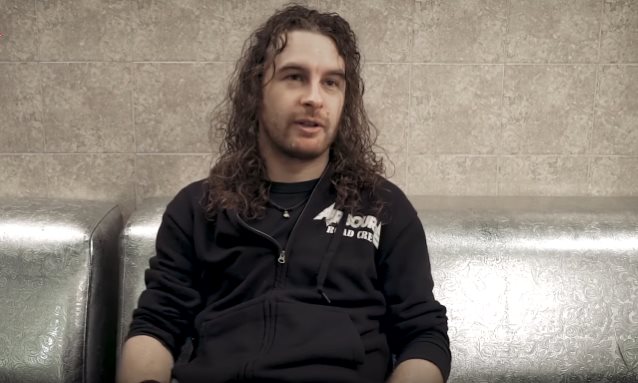 AIRBOURNE Frontman: AC/DC's ANGUS YOUNG 'Has The Biggest Balls In The World'

Spain's MariskalRock TV recently conducted an interview with guitarist/vocalist Joel O'Keeffe of Australian hard rockers AIRBOURNE. You can now watch the chat below.

Speaking about AC/DC's recent "Rock Or Bust" tour, which saw the legendary Australian hard rockers undergo several lineup changes, Joel said: "Look, so the tour was called 'Rock Or Bust', so it's either 'rock' or 'bust.' It's AC/DC, so they're gonna go ahead and they're gonna rock. So then, before the tour even starts, [drummer] Phil Rudd, unfortunately, can't join them on tour 'cause he has some legal commitments back in New Zealand, and they have to get Chris Slade back in the band. He hasn't been playing with them, but they've gotta quickly rehearse and get on the road. Angus [Young, AC/DC guitarist] already has the biggest balls in the world by going out there for the first time without his brother [Malcolm Young] his whole entire life on the biggest tour that they've ever been on. And then so they go ahead on tour, and then Brian [Johnson, vocals], unfortunately, has to leave. And then it's either 'rock' or 'bust,' so AC/DC keeps going; they don't wanna let people down. They keep going. And then, of course, Cliff [Williams, bass] now has left, and then now it's Angus and… Well, I don't know who the bass player's gonna be. Is Axl [Rose, GUNS N' ROSES singer, who filled in for Brian on a European and U.S. tour] there anymore? I don't know. I heard Axl did a good job. That's what a lot of people said — that he sang the songs well."

He continued: "I think with AC/DC, with Angus, all I can say is that he's incredibly brave to do what he did, to just keep going and to rock. 'I don't care. We're never gonna go bust.' I take my hat off to that never-say-die attitude. And who knows what can happen now? Anything's possible with AC/DC. They might have two years off and decide to get the band back together? Who knows?"

Asked what he would say if he was approached to step in as Johnson's replacement on some of the dates on AC/DC's world tour, Joel responded: "Look, I mean, it's not gonna happen, but if we were off the road and we weren't touring and they called up, I'd say, 'Yeah, of course. I'll come down.' But I'd wanna call Brian Johnson first before I do it and just say, 'Are you cool with this, man?' And, 'Give me some help. How do I fucking do this? This is insane.'"