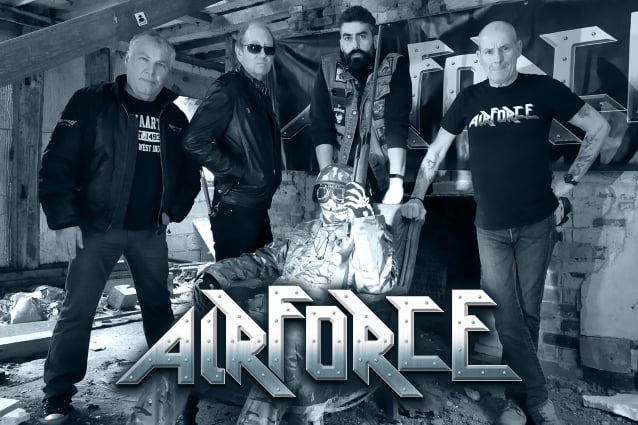 ROAR! Rock Of Angels has announced the signing of AIRFORCE to a multi-album deal.

The history of AIRFORCE goes back over 40 years ago to 1979, to an East London-based band called EL-34 in which Chop Pitman and Tony Hatton played together first, and were able to gain ample live experiences with exciting gigs in legendary venues like the Marquee club, Ruskin Arms and Cart & Horses. After several years playing mostly London metal shows, the singer and drummer departed in 1986, leaving Chop and Tony looking for replacements. Chop's very good longtime friend, IRON MAIDEN mastermind Steve Harris, suggested his former drummer Doug Sampson, well known to all metal fans from IRON MAIDEN's first legendary studio recordings "Soundhouse Tapes". Steve arranged some studio time for himself, Chop, and Doug to have a rehearsal jam session together, and a slice of NWOBHM history was made: AIRFORCE was born.

But times were not easy. For a stable lineup, a permanent singer was missing and the band was unfortunately unable to find one in the first eleven years of its existence before they broke up.

Pitman initially continued the band name AIRFORCE live and with various musicians. The first AIRFORCE album was released in 2016 with "Judgment Day", a kind-of compilation that aroused renewed interest in the band. That was the starting shot for Chop to reunite the old band members Sampson and Hatton. In 2019, Flavio Lino joined AIRFORCE as the new frontman, the right man at the microphone having finnaly taken his his place.

AIRFORCE is currently working on a new live longplayer, to be released later this year, as well as on its eagerly awaited third full-length album.