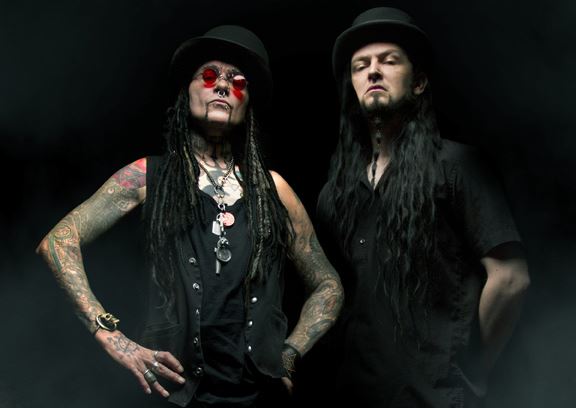 You're a legendary, pioneering rock star, you've headlined sold-out gigs all over the world, indulged in every rock 'n' roll decadence imaginable, survived drug addiction and alcohol abuse, crossed paths with the likes of Madonna, Courtney Love, Robert Plant and Johnny Depp, and released a revealing and critically-acclaimed autobiography. You've done all this and lived to tell the tale...so, what do you do next? Well, if you're MINISTRY's Al Jourgensen, you join forces with British dark-artist Sam Shearon, a.k.a. "Mister-Sam," to create a series of comic books and become a super hero yourself.

"Ministry: The Devil's Chord - The Chronicles Of Alien F. Jourgensen", a 13-issue comic book series, is targeted to premiere at next July's Comic-Con in San Diego. Each issue in the series will be based on a MINISTRY album, including the platinum-certified "Psalm 69", the gold sellers "The Land Of Rape And Honey" and "The Mind Is A Terrible Thing To Taste", as well as "Filth Pig", "Rio Grande Blood", "The Last Sucker" and "Relapse", all Top 20 albums on Billboard chart, among others.

Said Jourgensen, "I've been wanting to step away from music for a bit, switch gears...then I met Sam and then POOF! Sam turns me into a super hero. Ya, I'll sign up for that!"

"Ministry: The Devil's Chord" series will have a single story arc joining all 13 comic books together, and is themed in chronological order similar to MINISTRY's catalogue. The main thread will focus on aliens, conspiracy theories, the occult and the vile and corrupt world of governments... and of course record labels. The idea for a MINISTRY comic book was conceived by MINISTRY manager Angelina Jourgensen. The story/script of the comic book, written by Sam Shearon was inspired by conversations about Al's life with both Al and Angelina Jourgensen who provided the factual ingredients for Shearon to write this epic. Shearon has written the copy, created all of the characters and has designed and illustrated the artwork for all 13 main covers as well as the inner illustrations throughout the entire series.

"Ministry: The Devil's Chord" follows the adventures of Alien F. Jourgensen, a young musician who is discovered by a record label that seeks to change him, mold him, and control him. But as Alien focuses his attention on doing what he is truly passionate about — playing music — he discovers his true talent and becomes aware of the inherent powers that set him apart from everyone else, powers that are triggered by music. As his power grows, he sees truths that others don't: chilling realities about everything from the true intentions of those who really run the planet, to the untapped powers that lie within all of us.

The story is seen as an alternative view of the life and times of Alien F. Jourgensen and his rise to "super" power that you won't find in his autobiography. Combining elements of history and real-life Jourgensen experiences — including many tidbits that were left out of his recent autobiography — the comic books will have our hero traveling the world as a rock musician where he meets and interacts with figures such as William Burroughs and Timothy Leary.

"I'd love to have people like Trent Reznor, Billy Gibbons and Billy Haynes be characters in the series," said Jourgensen. "I mean, who doesn't want to be a super-hero?"

Oh, and for hardcore MINISTRY fans, know that there will be raccoons!

Each of the 13 issues will have a main cover illustrated by Shearon, and then at least one alternative cover created by a special guest artist, available as a limited edition. Some of the guest artists already lined up include Jon Schnepp, director of the animated death metal band on the TV show "Metalocalypse", Alan Robert, bassist in LIFE OF AGONY who wrote and illustrated the graphic novels "Wire Hangers", "Crawl To Me" and "Killogy", POWERMAN 5000's Spider One, and Digger T. Mesch, creator of the comic book series "The Other Dead".

Shearon, who uses the pseudonym "Mister-Sam," is a British dark-artist who specializes in horror and science fiction art. His work is influenced by ancient cultures, the occult, the supernatural, the paranormal, the industrial/art/revolution eras, and the unexplained. In addition to having had his work exhibited in galleries, he has created album sleeve artwork and merchandise designs for music artists such as Rob Zombie, IRON MAIDEN, KISS, FEAR FACTORY, RAMMSTEIN, A PALE HORSE NAMED DEATH and many others.

"I used to listen to MINISTRY at art college as a teenager," said Shearon. "To be immortalizing Al Jourgensen in a comic book series is an honor and a thrill ride into his life, that not many people get to see. Sitting down with Al and Angelina for two weeks at their home to take notes in order to write this has been one of the most exciting projects I've ever worked on. There were many days and nights where Al and I would be still awake at around 5 a.m. watching the sunrise, surrounded by empty beer bottles. Fond memories were stirred up, some wounds were opened but all in all both Al and Angelina shared enough of their real life tales to chronicle a story that you just couldn't make up! This is one hell of an adventure that I personally would love to see on the big screen one day...I will never look at raccoons in the same way again!" 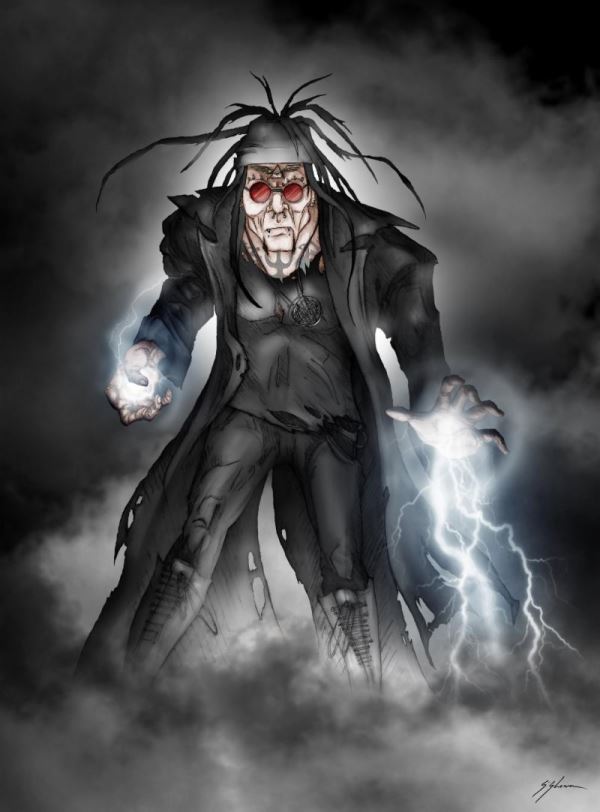