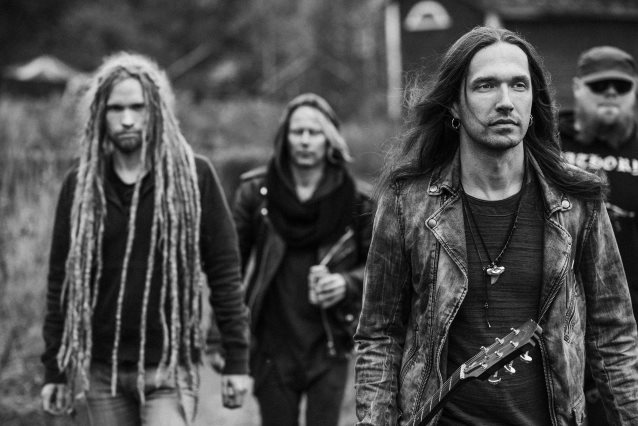 "No Cure", a brand new song from ALCYONA SKY, the Finnish band featuring former AMORAL guitarist Ben Varon, can be streamed below. The track is taken from ALCYONA SKY's forthcoming debut album, due later in the year.

Sometimes good things happen by accident, on their own. ALCYONA SKY, a new band comprising of familiar faces from the Finnish rock scene, is a good example of just that.

"After the previous AMORAL album, 'Fallen Leaves & Dead Sparrows', was completed in the spring of 2013, my plan was to take the summer off from writing and also to take a little break from the guitar," Varon explains.

But the acoustic guitar ended up with him at the summer cottage after all, and songs began to pop up in the idyllic setup by the seaside.

"I was surprised at how the songs kept coming, more than a few of them, and in rapid pace. And since they didn't sound like AMORAL material to me, I began toying around with the idea of doing a side project."

Ben's love for '90s rock — the sound of his childhood — is clearly present in the ALCYONA SKY material, as is the acoustic-driven sound of the '70s he found later in life and became a big fan of.

"The material dictated who I needed to play in this band. Micko Hell (DENIGRATE, MILLION DOLLAR BEGGARS) has always been one of my favorite singers, and I had his deep, soulful voice in mind already when writing the riffs and lyrics. I've played some cover gigs with Rale Tiiainen (THE BLACK LEAGUE, THE OHO, ANCARA) over the years, so I knew that he had the right, hard-hitting, laid back playing style that was needed. And Jyri Helko (FOR THE IMPERIUM, WARMEN) is the virtuoso of the group, whose musical bass lines took the songs to a whole new level. I was lucky that all three agreed to join me in this project immediately, so I didn't even need to think of alternative options."

Varon, Tiiainen and Helko began rehearsing that winter, and by the following summer, the band was so tight that when they entered Sound Supreme studios, all but the vocals was recorded live, in just two days. Ben and Micko recorded the vocals in the following months, whenever they had some spare time to focus on the task.

"Recording the album live, in one room, facing each other, and doing it so quickly too, was an amazing experience," Ben says. "That really tells you something about the level of these guys' musicianship, and it made me give my very best as well."

Even though the original plan was to keep ALCYONA SKY as just a one-album project, the band got so excited about both the material and the vibe between them, that the idea of live shows was quickly brought up. The material for the second album is also already in the making.

"It's so much fun to play with these dudes, and since I enjoy writing songs like this in between the metallic prog of AMORAL, why stop here? I already have a bunch of ideas for the second ALCYONA SKY album, and can't wait to see how this band works live!"

AMORAL played its farewell show on January 5 at Tavastia in Helsinki, Finland. Varon explained in an interview that the band's split happened because "it became clear that proper touring would be almost impossible because of everyone's schedules."