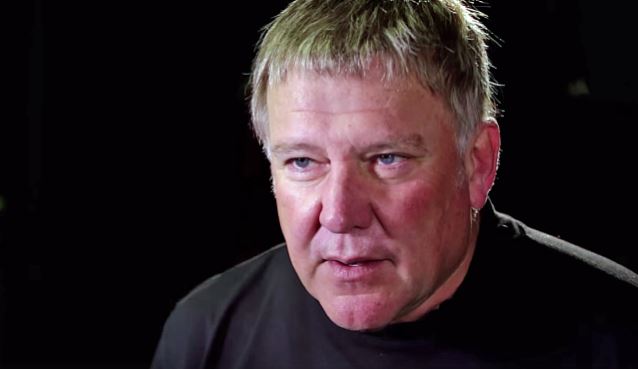 ALEX LIFESON Says 'It's Unlikely' RUSH Will Ever Tour Again

Alex Lifeson says that "it's unlikely" that RUSH will ever tour again, but inists that he will "probably" collaborate with Geddy Lee in the future.

A short time later, Lee played down Peart's comments, blaming the media for making too much of his bandmate's remarks.

In a brand new interview with SiriusXM's "Debatable", conducted at last week's Rock And Roll Hall Of Fame induction ceremony in New York, the arthritis-stricken Lifeson stated about RUSH's current status: "I would say that it's unlikely that we'll tour again as RUSH. Really, we toured for forty-one years, and I have to say that first year off, I felt like I was grieving for my career and the band, but truly, forty-one years of touring the way we toured, I shouldn't feel badly about that."

RUSH recently celebrated the 40th anniversary of its landmark 1976 album "2112" with a deluxe reissue featuring rare live and previously unreleased material, and, according to Lifeson, "right now there's some work being done on a similar thing with [1977's] 'A Farewell To Kings'." He said: "We're not really involved in that so much; it's a record-company thing, or a publisher thing. We like to be slightly involved, in just giving approvals and make sure that everything's done in a way that we would like to see it."

Even though there are no plans for RUSH to regroup in the foreseeable future, Lifeson revealed that "Ged and I will probably do something together. He's been really busy. He's working on his own little book project. He's become quite a bass guitar collector, and he wants to do a little thing on the history of the instrument. So that's keeping him super busy." As for Peart, Lifeson said: "I'm not sure what Neil's doing these days. He's on the West Coast. He's always got something going on."

Alex also talked in more detail about his plans to record and possibly release some of his newly composed solo material. "I'm writing a lot of music lately, and I'd like to do some stuff," he said. "I'm gonna play on a couple of other records over the next couple of months, just guesting and things like that.

"I'll always play music, I'll always love music," he continued. "I've been playing a lot more guitar lately than I have in a long time and writing a lot of stuff on the acoustic [guitar]. I'm having fun writing trippy kind of atmospheric stuff, a lot of acoustic, some electric stuff, of course. But it's really kind of fun being sort of not the guy that I was, writing at that time with the band. It's all solo stuff. I'll get friends to play on it and things like that."

While admitting that he didn't feel a "driving need" to release a solo record, Lifeson said that he had a more relaxed approach about making music these days. "It's funny. One day, it's, like, 'Yeah, this is exactly what I wanna do.' And then the next day it's, like, 'This sucks. Forget it. I'm not doing this,'" he said. "I love those songs, then I hate them, and then I love 'em again. So it's pretty typical, I think. It's a much more focused thing when it's the band. I just need to be more focused an a little more disciplined, I think. But it's something I would like to do."