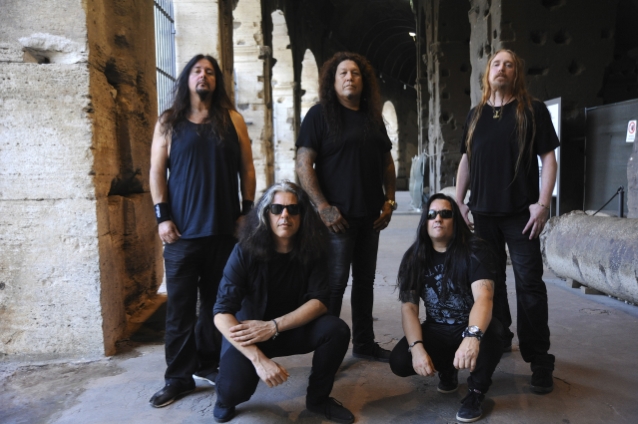 In a brand new interview with the "Basel Meets" podcast, TESTAMENT's Alex Skolnick was asked why his band wasn't included in the so-called "Big Four" of 1980s thrash metal (METALLICA, SLAYER, MEGADETH and ANTHRAX) — the dominant thrash metal groups that helped bring that genre into the mainstream. "Interestingly, I have no problem with it, because I look at it as a seniority thing," the guitarist replied (see video below). "I joined TESTAMENT in very late '85; I think my first gig was early '86. So, 1986 — what happened [that year]? METALLICA releases 'Master Of Puppets'. They were already on their third record. They were on their way to becoming one of the biggest bands in the world, which was clear… I mean, it wasn't clear they would be that level, but we knew they were gonna at least be as big as IRON MAIDEN and SCORPIONS at that time. So they were already off and running. SLAYER released 'Reign In Blood' that year, after having several albums out. ANTHRAX had several records out. I think at that point, MEGADETH was on their second record. So all those bands, they were past their first record. They were all off and running. At the time, the classic TESTAMENT lineup was just forming. So, I'm fine with that. They were there first, and they were doing big things. And we came along a little later. But I have no problem with those groups being classified together."

Alex's comments echo those of TESTAMENT singer Chuck Billy, who told the "Music Mania" podcast last year that his band came along too late to be included in the "Big Four."

"When you say 'Big Four,' you think of the '80s when that was what was referred to as the 'Big Four,' which is correct — those four bands [METALLICA, MEGADETH, SLAYER and ANTHRAX] were the biggest four bands of our era; at that time, all [of them were] at the platinum level, when there was much more acceptability to this music," he said. "Around '91 [or] '92, the grunge scene came in, and all the bands following us — EXODUS and OVERKILL and all those kind of bands — lost that momentum because the industry started changing its format. So when they say [METALLICA, MEGADETH, SLAYER and ANTHRAX are the] 'Big Four,' I say that's correct. We were the next generation of the 'Four' [laughs], but we were just caught in the wrong time… wrong place, wrong time."

Several years earlier, Billy told Metal Insider that METALLICA, MEGADETH, SLAYER and ANTHRAX are the only bands that deserved to be lumped together as part of the "Big Four."

"I think that when it comes down to the 'Big Four,' as far as I can see it, back when metal was at its height in the late '80s/ early 90s, all of those 'Big Four' bands had a ton of great success and were selling millions of records," he said. "I think around that same time, we were growing apart as a band and the music market had changed. So I think we were kind of, I guess, as they say, 'on deck in the batting circle' waiting for our success selling millions of records at that time.

"So when people say the Big Four, Five or Six, I don't see it that way," he continued. "The 'Big Four,' those four bands had great success selling millions of records. But the rest of us — EXODUS, DEATH ANGEL [and] TESTAMENT — we didn't sell out those festivals or that amount of records. So I don't see us being compared to that. I'd say if metal was still going as strong as it was, yeah, we all stood a chance to sell a lot of records. That's just my take on it. When people talk about that, to me, those four bands are justifiable, and that's it. I don't see any other bands that were the 'Big' whatever."

Back in 2017, OVERKILL vocalist Bobby "Blitz" Ellsworth said that "when it comes to being selected and not selected" for inclusion in the "Big Four", "that's a simple accounting issue. When you talk numbers, numbers make the world go around, numbers put food on your table, and numbers put the 'Big Four' in arenas. And they sell enough records to do that… He who sells the most gets the pole positions."