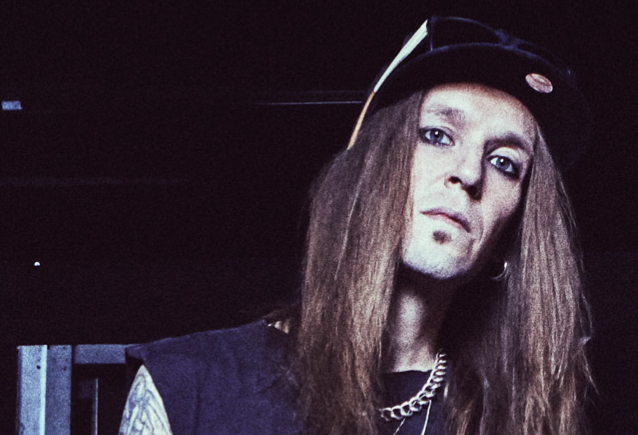 ALEXI LAIHO's Ex-Wife And Former SINERGY Bandmate KIMBERLY GOSS: He Was 'My First True Love' And 'My Best Friend'

Kimberly Goss, who was married to Alexi Laiho nearly two decades ago, has paid tribute to the former CHILDREN OF BODOM frontman, calling him her "first true love" and "best friend."

Goss, Laiho's former bandmate in SINERGY, took to her Instagram earlier today (Monday, January 4) to share a few personal snapshots of her with Alexi, and she included the following message: "My first true love, my band mate and my best friend. The silver lining throughout this entire pandemic is that we were given the gift of having so much quality time together. Our marathon FaceTime calls, the endless text messages and phone calls at all hours of the day and night will stay with me forever.

"I am so comforted by the fact that we were able to reflect on our lives together both on and off the stage and to cherish our continued friendship that has remained in tact for all these years.

"Allu, my heart is both full and broken at the same time. Not many people are able to have nothing left unsaid with someone whom they had such a long, rich history with. You gave me peace and left me with zero regrets in the months and weeks before your tired body finally gave out. I thank you so very much and I'll love you forever and always.

"You and Tommi [former SINERGY drummer Tommi Lillman, who died in 2012] are together again and I can hear the joy and laughter coming from the two of you, as if it were yesterday.

"You will always remain in the hearts of us who knew and loved you and your legacy will live on forever in the music you blessed the world with.

"Close your eyes my darling. You're asleep now and finally at rest.

"I love you Allugator, -Kimberly (or 'Kani' as you affectionately called me)".

Goss and Laiho were married in 2002 during a private ceremony in Finland after a four-year courtship. Two years later, they separated but still remained close friends.

Laiho died in his home in Helsinki last week. The 41-year-old had suffered from long-term health issues in the years leading up to his death.