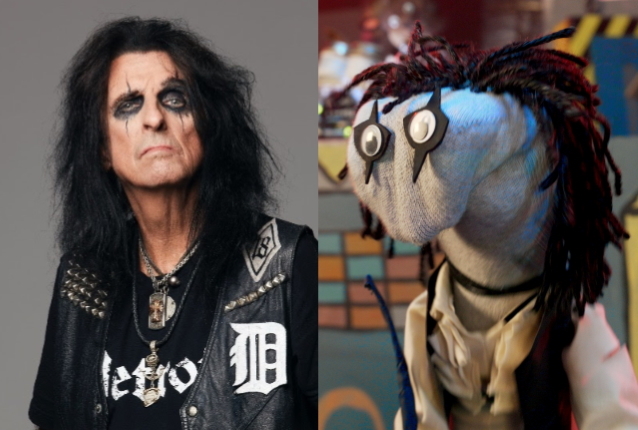 Halloween couldn't kick-off properly this year without a Halloween Sock Puppet Parody video; This year, Alice Cooper gets the sock puppet treatment with a spin-off of the track "Feed My Frankenstein" from the 1991 album "Hey Stoopid". The video features a "Frankensock" rocking the lead guitar, fashioned from what we assume is the body parts of other clothing garments. The video stylizes Cooper from wardrobe down to signature stage stunts, such as a guillotine cutting the sock puppet's head off.

Director Brady Tulk and producer Johnny Zero-Forever teamed up with musical talent RIVETHEAD to knock it out and this video certainly does not sock.

Sock Puppet Parody has created many tributes to bands such as METALLICA, SLIPKNOT, and more. The outfit is currently in pre-production for a long-awaited season three which will begin filming early 2021 and includes a dozen new parody acts.

Back in 2019, Tulk told VoyageDallas about Sock Puppet Parody: "It's a YouTube series that takes iconic bands and turns them into sock puppets. Our team does not cut corners. We not only create the music from the ground up, but we strive to stay true to the last detail. We research the band thoroughly to pay a tribute to the artists and we film it with the best production value we can. We take the concept of the song and apply sock related lyrics.

"We have caught the attention of the bands theirselves, from SLAYER posting our video, to PANTERA's Vinnie Paul making a cameo, to getting a seal of approval from SLIPKNOT's Corey Taylor."

Regarding how Sock Puppet Parody was conceived, Tulk said: "I met a producer named Johnny Zero on the RIVETHEAD set. We eventually went to a concert together and saw the iconic band STATIC-X and the frontman, Wayne Static, had his hair in foot-long spikes and his long beard braided. Johnny and I knew STATIC-X would make for a fantastic sock puppet re-creation. We teamed up and decided to not just do one video, but do six episodes to see if they catch on. We knew there was something special about the concept, and we wanted to see how people would react.

"The pivotal moment for Sock Puppet Parody was when we uploaded a SLAYER parody to our YouTube channel. That day we were posted by numerous metal magazines with thousands of fans leading up to the band posting our video to their Facebook. In one day, over one hundred thousand people saw our video. It was an unbelievable experience.

"Since then, Johnny and I have been cultivating our audience and growing the brand."