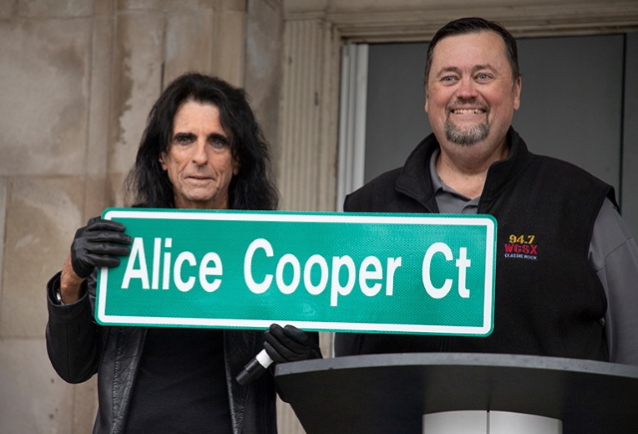 ALICE COOPER Gets Street Named After Him In Westland, Michigan: Video, Photos

The official ceremony began at 2 p.m. ET, hosted by Jim O'Brien, and included remarks from Cooper, who attended the unveiling prior to his concert performance at the DTE Energy Center Saturday, September 25. It also featured a live performance by Alice Cooper cover band THE NIGHTMARE.

"I love the idea that they're naming streets after rock stars in Detroit," Cooper told the crowd, according to the Detroit Free Press, going on to suggest "Iggy Avenue" and "MC5 Street." "There's probably more rock stars than politicians."

To commemorate the dedication, the Rock And Roll Hall Of Fame in Cleveland added an official "Alice Cooper Court" street sign to its "Legends Of Rock" exhibit, which features a new Alice Cooper display. In addition to the street sign, fans can check out Alice's original electric chair prop and costumes worn from his iconic tours.

"Rock and roll is as much about the spectacle and visual as it is the sonic. Inductee Alice Cooper spawned a new generation of rock and roll with both," said Nwaka Onwusa, chief curator and vice president of curatorial affairs, Rock And Roll Hall Of Fame. "We are thrilled to add the official street sign to our exhibit as we celebrate Alice Cooper's legacy with fans and share stories behind the music he created."

Photo courtesy of City Of Westland

Posted by City of Westland - Administration on Thursday, September 23, 2021