Rock 'n' roll fans were treated with a once-in-a-lifetime experience at a charity concert to raise money for music education. Alice Cooper, all of the members of KISS, Rob Zombie, EUROPE and dozens of other rock legends came together at THE Fundraiser in Las Vegas, Nevada and performed for thousands of fans at the Orleans Arena.

Alice Cooper has been a longtime supporter of the academy. He was on hand in Sioux Falls for its groundbreaking last year and grand opening concert series this spring. The academy's Welcome To My Nightmare recording studio was dedicated in his honor. Cooper operates his own performing arts charity, Alice Cooper's Solid Rock, in Phoenix.

"You should see these kids when you go out and play in front of them," he said. "They are in these rooms trying to learn guitar and then they see the real guys right in front of them. You can see the inspiration in their faces."

Another academy supporter performing at THE Fundraiser was Jack Blades of NIGHT RANGER. NIGHT RANGER wrote a song on the stage of the Brennan Rock & Roll Academy this year in that will be included on their upcoming new album.

"All those times when we were young and did not have a place to go to get our creativity going," he said. "Chuck [Brennan] —and Alice with Solid Rock — have made places for kids to go to let their creativity just run wild."

"We raised more than a million dollars for the academy," said Brennan. "It was an incredible night and I can't thank the artists enough for their time, talents and commitment to music education for our children."

Brennan, who started his business career in the music industry, founded the academy in 2012 and celebrated its grand opening earlier this year in his hometown of Sioux Falls, South Dakota with a week-long series of concerts in that included friends Alice Cooper, members of KISS, NIGHT RANGER, comedians George Lopez and Louie Anderson, Sebastian Bach and Vince Neil, along with dozens of other celebrities.

Between the two fundraising efforts, Brennan has raised more than half of the $3.6 million needed to operate the Brennan Rock & Roll Academy in Sioux Falls for the next 20 years.

"The academy is a partnership with the Boys & Girls Clubs, which I was a member of when I was a kid," he said. "I want to donate those kids who really love music and want to learn about the industry a chance I never had." The academy offers free (no cost) music lessons to Boys & Girls Clubs members, along with opportunities to perform and learn about the music industry.

"THE Fundraiser showed just how much the rock and roll industry believes in our youth and wants to assist them pursue their musical passions," said Brennan. "Dozens of rock stars from all over the world came to Las Vegas for one incredible night and raised more than a million dollars for these kids. It was, without question, incredible."

In addition to the performances, many stars donated items and experiences in that raised more than $350,000 for the academy. Auction items included opportunities to meet artists like Slash and Rob Zombie, private concerts for up to 500 people with Vince Neil, WARRANT and RATT and a possibility to tour Gene Simmons' home office and KISS museum. "The winner of one will even get to join TWISTED SISTER on stage at a concert," said Brennan. In addition to the auction, there was a raffle of six Paul Stanley (of KISS) Washburn guitars in that were signed by all members of the band.

Among the evening's surprises was a performance by Alice Cooper backed up by academy members for his iconic "School's Out" and nearly all performers in the concert joining the members of KISS onstage to perform "Rock And Roll All Nite".

Next up for the music (education) man? The Brennan Rock & Roll Academy is coming to Las Vegas. Brennan is currently working to bring the program to the Boys & Girls Clubs of Southern Nevada and expects to make an announcement on his plans for it next year.

"My vision is to have a Brennan Rock & Roll Academy in every major city in the U.S. within the next 20 years," Brennan said. "So much has been pulled from public school music programs and so many children can't afford to pay $100 for a one-hour guitar lesson. We are bringing music back in to their lives."

Brennan himself had no means to learn an instrument as a child. "So I am especially pleased when the academy gives more than 600 lessons a month, completely free (no cost) of charge, to Boys & Girls Clubs members," he said. "This program is changing their lives."

Brennan is a philanthropist who regularly contributes to organizations throughout the country. He is especially generous in Southern Nevada, where he is a major donor to Opportunity Village & Henderson Little League along with dozens of other non-profits. When he founded the Brennan Rock & Roll Academy, he committed more than $3 million dollars to the Boys & Girls Clubs of the Sioux Empire for its ongoing operations.

The Brennan Rock & Roll Academy was founded in Sioux Falls, South Dakota by Chuck Brennan, a philanthropist and business owner. The academy gives the children of the Boys & Girls Club in Sioux Falls the possibility to grow by offering free (no cost) music lessons to those in that may otherwise not be able to get them. 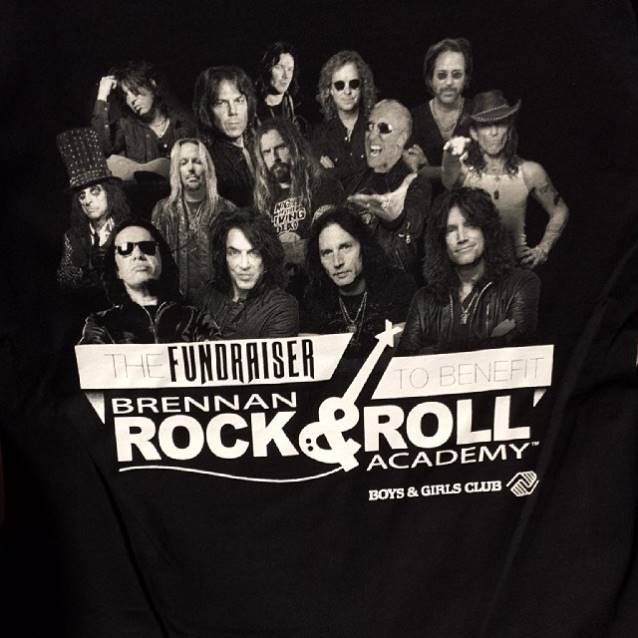