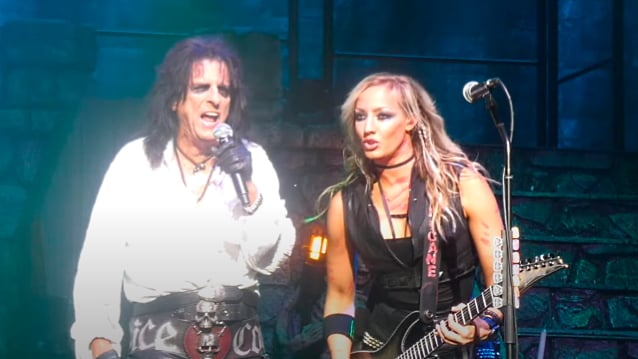 Strauss has been playing with Cooper since 2014 when she replaced Australian musician and former Michael Jackson player Orianthi. Nita joined Alice in time for a mammoth MÖTLEY CRÜE tour. She was recommended to Cooper by the legendary rocker's former bass player and WINGER frontman Kip Winger.

Speaking to Meltdown of Detroit's WRIF radio station, Alice stated about Nita: "She just won [the] 'Guitarist Of The Decade' [award] in Guitar magazine. Best chick in the world — she's such a great chick. Gets on stage, and she's a force of nature unto herself. An I've got Ryan Roxie and Tommy Henriksen in the band also — you're talking about two great rock guitar players. And then I needed a chick that could really play.

"Oranthi was a great blues rock player," he continued. "She could play with Eric Clapton — she was that good. And she went off to do an album on her own. And then I accidentally found Nita, and Nita was a shredder. And that's what I was kind of looking for — was a shredder. But I didn't know how good she was, but she was a total shredder up there and killed it. And immediately just fell right into it with the guys in the band; she was one of the guys. Great chick. And she just keeps getting better. That's the thing about it — she just keeps getting better. No drama — it's always just, can't wait to get onstage."

Earlier in the month, Alice released a new single, "Don't Give Up". Produced by Bob Ezrin using remote technology, the song is a spontaneous reaction to the challenges facing us all right now.

A strictly limited "Don't Give Up" seven-inch vinyl picture disc will be released on August 14 on earMUSIC.