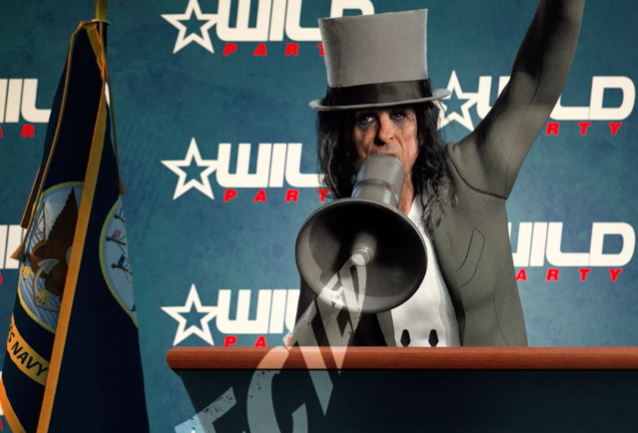 Legendary rocker Alice Cooper is gearing up for the 2020 presidential election in the only way he knows how — by running for president, something he has done satirically every four years since releasing the song "Elected" back in 1972.

The Godfather of Shock Rock released a new "campaign" video for the classic track. The clip takes a lighthearted look at the process and positions Cooper as the best candidate. Running on the Wild Party ticket, Cooper's campaign platform speaks volumes: "I can do nothing as well as they can do nothing."

The new video features call-backs to the original 1972 music video, in which Cooper first announced his "candidacy" and the formation of the Wild Party.

Since all eyes and ears are on this year's heated election, Cooper's video administers just the right dose of levity that we all need. The song remains a tried and true anthem for modern times.

"Elected" was the first single from Cooper's iconic sixth studio album, "Billion Dollar Babies". The record reached No. 1 in the U.S. and U.K. and was certified platinum by the RIAA.

In a 2018 interview with The Guardian, Cooper said that he keeps his political opinions to himself. "I don't like to mix politics and rock 'n' roll," he said. "I don't look at Bono, Sting and Bruce Springsteen as political. I look at them as being humanitarian. I'll contribute to anything humanitarian. Helping people who can't help themselves. But when musicians are telling people who to vote for, I think that's an abuse of power. You're telling your fans not to think for themselves, just to think like you. Rock 'n' roll is about freedom — and that's not freedom."

Four years ago, Cooper said that rock stars offering their political opinions is "the worst idea ever." "First of all, why do people think rock stars know more than they do?" he said. "That is the biggest fallacy in the world — if anything, we're dumber. We're not smarter than anybody else. I mean, why do you think we're rock stars?

"Trust me, we don't read magazines you don't read. Nobody calls us up and gives us as inside information on politics. We know less than you do. If I watch TV, it's 'Family Guy'.

"Rock 'n' roll was built to go as far away from politics as you could get. When my mom and dad talked about who to vote for, I'd go in the other room and put on THE BEATLES or ROLLING STONES — and I'm still like that."

Cooper, who considers himself a humanitarian, said that he had no problem with artists using their platform to highlight global issues if it benefited others.

He said: "I think what Bono does and what [Bruce] Springsteen does, Sting and all the people that raise money for others — that's humanitarian, and I'm all for that. But I don't think that's political."

In a 2016 interview with Rolling Stone, Cooper stated about then-Republican presidential candidate Donald Trump: "He's an interesting character. It seems like he shoots himself in the foot every single day and gets more popular by doing it. It's the weirdest. It's like [Kurt] Vonnegut: Everything that shouldn't happen is happening."

Cooper previously said that he would even go so far as to do the opposite of what everyone else is doing just to make a point. During the 2004 election season, he said: "When I read the list of people who are supporting Kerry, if I wasn't already a Bush supporter, I would have immediately switched. Linda Ronstadt? Don Henley? Geez, that's a good reason right there to vote for Bush."

He also mused about sitting between such political rocker icons as John Lennon and Harry Nilsson while they argued politics and thinking, "I don't care."