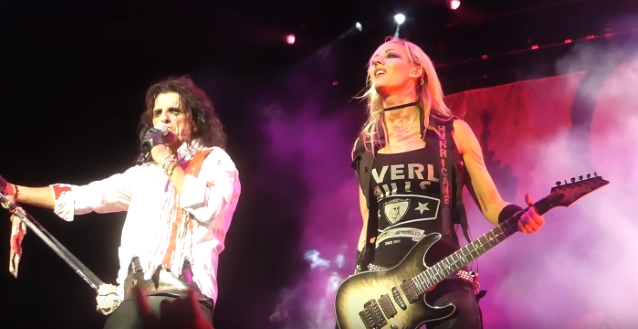 Zack Attack of WMXQ "Maximum Classic Rock" recently conducted an interview with Alice Cooper. You can listen to the entire chat via the SoundCloud widget below. A few excerpts follow (transcribed by BLABBERMOUTH.NET).

On his grueling schedule:

Alice: "It becomes a rhythm after a while. Not only that, but I got four albums coming out: Two from the [HOLLYWOOD] VAMPIRES and two from ALICE COOPER. We got two live albums coming out and two studio albums coming out, so when there is time, we're recording. The great thing is my wife is in the show, so my wife is here on tour with us and when we do get home, I've got three kids, three grandkids and we're very family oriented, so we do everything together, so it's a lot of fun."

On his current stage show:

Alice: "We're always going to do all the hits. That goes without saying. I think the audience wants to hear the hits, so we do all the hits and we do all the things that made Alice famous. We have the guillotine in the show, we have the nurse and the straightjacket and all the things people are going to want to see and there's a bunch of surprises in the show, things they're probably not expecting, but the most important thing about this tour is it's probably the best touring band I've ever had. Our drummer, Glen Sobel, just got voted best drummer in rock and roll. Our guitar player, 'Hurricane' Nita Strauss, 28 years old, looks like a model, plays like Eddie Van Halen. She just got voted best female guitar player in rock and roll. Then I got all the other guys in the band who are stone-cold professionals. The band is so good, it's ridiculous."

On why he feels so strongly about his current lineup:

Alice: "It's almost like I hand-pick everybody, even the crew. Everybody that works in our organization, there's no ego involved in any of us and that shows up onstage. When we get onstage, everybody says it looks like you're having the most fun of anybody. That's really what it is. Everybody is best friends. There's never any arguments, there's never any yelling, never any screaming, nobody's mad, nobody's ego tripping. We just have a great time onstage."

On keeping his live performances fun:

Alice: "You always want to do new songs, songs off the 'Paranormal' album. That album did really well, it was Top 20 in 25 countries. We do three songs off that album and it's always nice to do the new stuff because we're used to doing '[I'm] Eighteen' and 'School's Out' and 'Poison' and all those songs, but when you get to do a couple of new ones and then you do a couple of deep cuts, that the audience figured you'd never do, that's when you get a great reaction from the audience. This show starts in fourth gear and stays there, so we don't give the audience a chance to rest at all. We figure we should be on an even playing scale: They don't get to rest, we don't get to rest."

In August, Cooper released the live album "A Paranormal Evening At The Olympia Paris".

The legendary rocker is continuing to tour in support of his most recent album, 2017's "Paranormal".

The current leg of the trek runs through October, ending just in time for Cooper to celebrate Halloween.