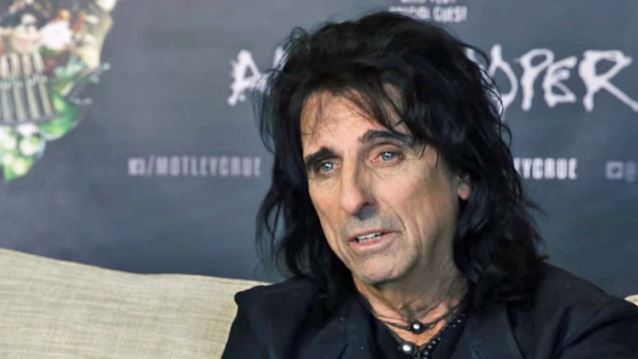 Legendary rocker Alice Cooper recently talked to NME about sharing the stage with MÖTLEY CRÜE as part of the latter band's "The Final Tour", which kicked off last year and will end New Year's Eve at the Staples Center in Los Angeles after one more round of North American gigs.

Speaking about what he liked about the '80s "hair metal" scene, Cooper said (see video below): "There was GUNS N' ROSES and MÖTLEY CRÜE and CINDERELLA and POISON and all these bands, and the thing that I liked about it was that it was glitzy — it was very glitzy and glam. And it's when MTV started, so there was the perfect outlet for a three-minute glitzy, glam rock and roll show. So all these bands had to really look good, they had to play good, they had to have hit songs. I mean, that's a pretty good combination."

He continued: "MÖTLEY CRÜE, all of a sudden, were these guys that looked like girls and were nailing every girl in town, and that was their image. And everybody went, 'Well, what's wrong with that? That seems like the right idea.'"

Cooper added: "The thing that impressed me the most about MÖTLEY CRÜE was Tommy [Lee], the drummer. I looked at them and I said, 'Jesus, the drummer is really good.'

"A lead singer always looks at a band and says, 'Who can I steal out of this band?' That drummer was already on my list. I said, 'If this band breaks up, I'm grabbing this guy.'"