Legendary rocker Alice Cooper will launch a new song called "Don't Give Up" on May 15 and he's calling on fans to be a part of this special track.

Share a photo or video of you holding a sign featuring a word from the song's lyrics and you could be in the final video.

Said Alice: " I know these times are hard, but there is hope. I wrote a new song, 'Don't Give Up', I want my minions to be a part of this special song."

How and what to submit: Select one word from the lyrics and take a photo or video of yourself holding a sign with that word in big, bold letters. Alice will pick the best ones to feature in the video. The bigger the sign, the better. Photos/videos with good lighting and without props work best.
Photo/video must be shot in landscape on your phone or camera and in high resolution (1080p for video). Submit multiple photos of different lyric words for a better chance of being featured.

Entries must be submitted by Monday, May 4 to be considered.

Last month, Cooper told Rolling Stone that he will use the downtime from having his North American tour postponed to work on new music.

"While our management is working to reschedule the postponed shows, I'm going to finish work on my next album, which is nearly done," he said. "At least now I won't be squeezing in vocal recording sessions on days off, between shows. I don't like a lot of time off, as anyone who sees my schedule already knows, but a little extra time at home can be re-energizing."

"Breadcrumbs" featured covers of Bob Seger's "East Side Story", the MC5's "Sister Anne", Suzi Quatro's "Your Mama Won't Like Me" and MITCH RYDER & THE DETROIT WHEELS' "Devil With A Blue Dress On", plus a reworking of "Detroit City" from 2003's "The Eyes Of Alice Cooper" album, titled "Detroit City 2020", and a new song co-written with Wayne Kramer, "Go Man Go".

I know these times are hard, but there is hope. I wrote a new song, "Don't Give Up" & I want my minions to be a part of this special song!

Submit a photo of you holding a sign ft. a word from the lyrics & you could be in the final video. https://t.co/6UzLvFQ7It
#DontGiveUppic.twitter.com/wlk0K0vNi1 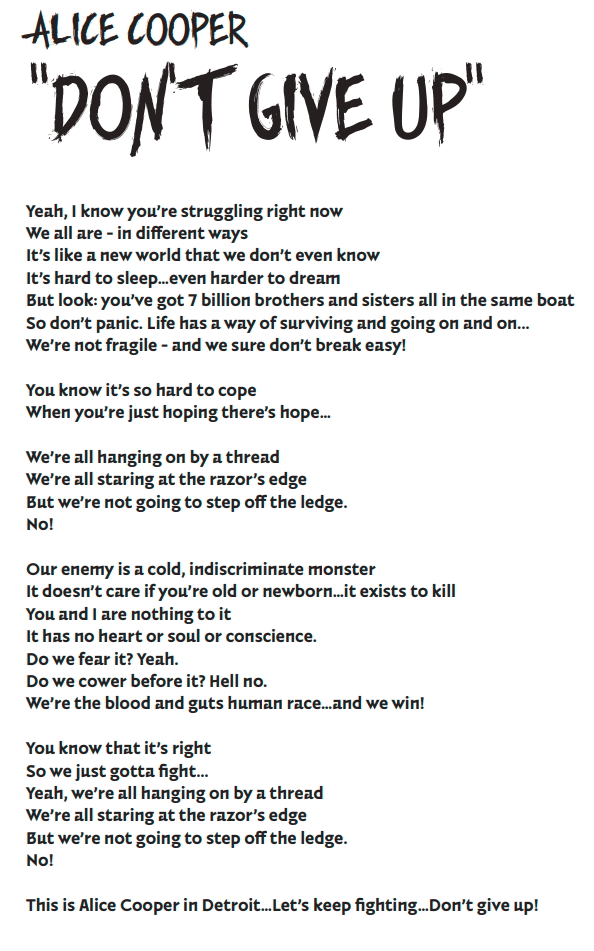