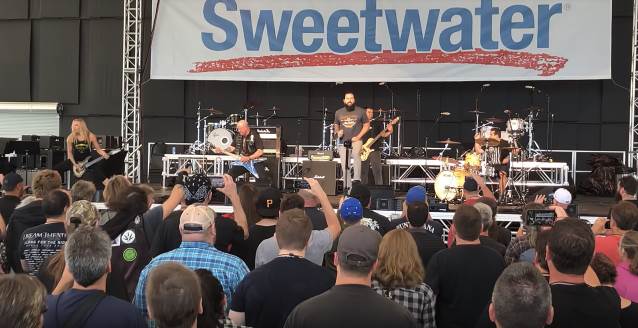 On Saturday, June 23, Nita Strauss (ALICE COOPER) and Nick Bowcott (GRIM REAPER) paid tribute to Vinnie Paul Abbott by performing a cover version of PANTERA's "Walk" at Sweetwater Gearfest 2018 in in Fort Wayne, Indiana. Video footage of their rendition can be seen below (courtesy of 60 Cycle Hum).

Recalling how he first met Vinnie Paul and his brother, PANTERA guitarist "Dimebag" Darrell Abbott, Nick said: "In 1985, my stupid band GRIM REAPER played a tour called 'Fear No Evil'; we had an album out. We played a show in Texas [and] a local band opened for us. The guitar player kind of looked like me but shorter… and he could drink more than me too, which was actually quite impressive. The drummer was his brother, so there was this Van Halen thing. And I watched them and they blew me away. The guitar player gave me a tape afterwards; it was called 'Projects In The Jungle'. The band was called PANTERA. Fast forward five years later, my manager was managing PANTERA and they got to be really good friends of mine. I had the privilege, the honor, the pleasure of working with Dimebag Darrell on all of his guitar stuff. I was an amazing gig. I got to sit with the guy. He showed me how to play his stuff backstage, in buses, in hotel rooms, at his house, and he paid me for it. It was the best gig ever. And I got to know his brother, and the bond between them, it was surreal. They played together marvelously.

"The magic of VAN HALEN is often the fact — people forget it but it's about the link between Edward and Alex," he continued. "The same thing, the same kinetic energy happened between Darrell and Vinnie; that's why PANTERA was so magical. Dime got the attention, Philip [Anselmo] got the attention, but the power groove came from Vinnie Paul. Those drum beats are unbelievable. If you play PANTERA stuff and the drums are off, you are off and you shouldn't do it.

"And the sad thing is, my heart goes out to their father," Nick added. "To have both sons pass away, I can't imagine. He's a good friend of mine, a wonderful human being, so spare some thoughts for that man tonight, because that's gotta be very, very, very hard indeed. But the cool thing is, looking at the glass as being half full, finally the brothers are reunited."

Vinnie Paul died on Friday, June 22 at his home in Las Vegas at the age of 54. His body has been turned over to the medical examiner to determine a cause of death, and after that, he will be flown back to his home state of Texas to be buried between his mother and brother.