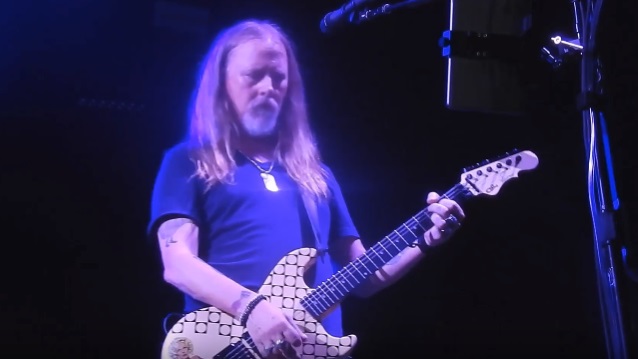 On May 15, ALICE IN CHAINS members Jerry Cantrell and William DuVall took part in an interview and three-song acoustic performance at The Sound Lounge in Chicago, Illinois. You can watch video footage of the event below.

Asked why ALICE IN CHAINS used so many different studios to record its upcoming album, Cantrell said: "We were talking about recording in Seattle and going back to the studio that we recorded the 'Alice In Chains' [1995] record in, which used to be Bad Animals; now it's Studio X. And I think it was something before that as well. It's like the main studio in Seattle, and all the bands have recorded there at one time or another. So it was cool to go back, and we spent the whole summer there doing basic tracks. And then [producer] Nick [Raskulinecz] has a studio out in Nashville — maybe about 45 minutes outside of Nashville — so we still had a lot of vocals and a lot of guitars and stuff to do. Sean [Kinney, drums] came out for a little bit, but it was basically me and Will; we just went out to Nashville. And then I got sick in the middle of that. I went to Mexico to party with Sammy [Hagar] for his birthday and I got ill. And that kind of knocked me off for a couple of weeks, so I lost some time there too. So I actually did a lot of recording on my own that I wasn't able to do in Nashville, because I was ill, so I did a bunch of vocals and guitar stuff at my house. And we capped it off at Henson [in Los Angeles], which has been our kind of home."

Cantrell also talked about the lyrical inspiration for "The One You Know", the first single from the upcoming album, which was released earlier in the month. "It's always really difficult for me to lay out what it is," he said. "'Cause I'd rather you tell me… and not even tell me — it be whatever it is to you. And I'm a little selfish too — I like to keep what it is for me as well. The cool part of songwriting, I think, and the challenge of it is taking something personal that is internal and making it universally translatable to everybody. We're all human beings, so we're not that far apart, and we're all pretty much the same, basically. So if you feel something and you put it out in a way that's not completely so spelled out, I think it's easier for people to make it their own."

On May 3, ALICE IN CHAINS released the Adam Mason-directed video for "The One You Know".