The trek kicks off at the legendary First Avenue in Minneapolis and will wind its way across the country hitting major cities such as Chicago, Detroit, Nashville, New York, Philadelphia, Seattle and Los Angeles, to name a few.

Asked in a recent Instagram Live question-and-answer session with fans how he chose "Atone" to be the first single and opening track from the new LP, Cantrell said: "When you make a record, you have a body of work, and generally it's pretty easy, out of everything that you have, to figure out where you wanna start and where you wanna end. So 'Atone' was always a strong contender. My partner on the record, [film composer] Tyler Bates, and [longtime engineer] Paul Figueroa both felt pretty strongly about that song as an opener as well. So when it came to track listing, I was kind of bouncing back and forth, and it just felt right. It's got an attitude that kind of sets the tone for the whole body of work. It's an interesting song. I think it was one of the first tunes that I showed Tyler when we were kind of gathering material. And when I played that riff, he was, like, 'Man, that's cool.' And I'm, like, 'Man, I've been carrying this riff around for years, and I haven't figured out a way to make it into a complete song that's as good as the riff and the chorus idea that I had.' The other thing that he thought was really interesting was the fact that it's in an open tuning, which is normally a major tuning and used for kind of blues slide-type stuff, but it's pretty minor sounding."

Jerry co-produced "Brighten" over the past year with Bates and Figueroa. They welcomed a dynamic cast of supporting players, including drummers Gil Sharone and Abe Laboriel, Jr. (Paul McCartney), pedal steel master Michael Rozon, Vincent Jones on piano, Wurlitzer, and organ. Other rock legends added to the fun of this LP, including Duff McKagan (GUNS N' ROSES) on select bass tracks, Greg Puciato (THE DILLINGER ESCAPE PLAN) handling all of the background vocals and Joe Barresi (TOOL, QUEENS OF THE STONE AGE) overseeing the mixing of "Brighten". Together, they recorded eight originals and the LP closes with an approved-by-Elton John cover of his classic "Goodbye" as the finale.

Jerry's career outside of ALICE IN CHAINS has consisted of two solo albums and contributions to major film soundtracks.

Cantrell's first solo album, "Boggy Depot", was released in 1998, followed by his second album, the aforementioned "Degradation Trip". In addition to his solo artist work, Jerry has released music on soundtracks for several films, including "Spider-Man", "The Cable Guy", "John Wick 2", "Last Action Hero" and "The Punisher". 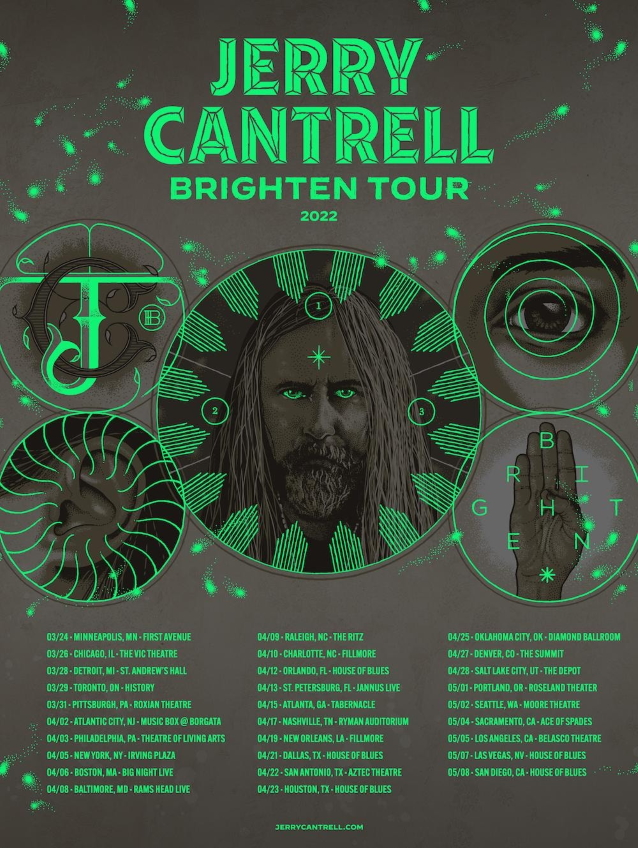