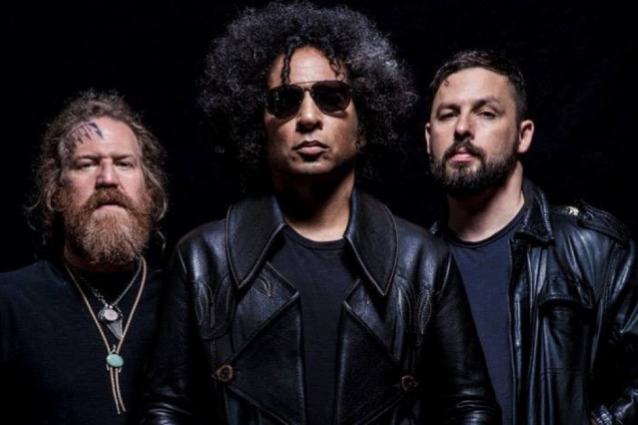 During a brand interview with the "BREWtally Speaking" podcast, ALICE IN CHAINS singer William DuVall was asked if there are any plans for more recording and touring activity from GIRAFFE TONGUE ORCHESTRA, his collaboration with members of MASTODON and THE DILLINGER ESCAPE PLAN. He responded (hear audio below): "Well, there's no plans right now, but I would never discount that. I would never say never. One thing is I'm so occupied right now with [my solo album] 'One Alone' that that's gonna really take up — that has got to be the central focus of my time for the next year or so. And the other guys, I know they stay busy as well, even if it's not necessarily public stuff. There's a lot that we all do behind the scenes and so forth.

"The 'Broken Lines' album by GTO, I think it's a high water mark of all of our careers, of everyone that was involved in that band," he continued. "I'm extremely proud of it. I'd like to do more, if the stars line up — I think it'd be great. I also, if nothing else, wouldn't mind perhaps playing some shows around the 'Broken Lines' album, because one thing that I found really unfortunate is that album was terribly underserved by our lack of performances. It's just how it worked out. We had a U.S. tour booked and then we had to cancel it. Brent [Hinds] broke his leg on his motorcycle. So the only shows that we played were our debut at [U.K.'s] Reading and Leeds [festivals] in 2016, and then we did South By Southwest in Austin, Texas in 2017. And that's it — people got three shows of GIRAFFE TONGUE ORCHESTRA. And that is just not right — that's just not right, in my opinion. So, we'll see how it goes."

DuVall added: "I'm happy that people continue to discover that music, and I hope more and more people keep on discovering that music, 'cause it's really, really cool. That was when we do — if we ever did come out and were able to play some more shows, more people would be into it and be able to come out. Those shows we played were really fun, and I can imagine a whole tour of shows with that kind of energy being a really, really great time."

"One Alone" arrived on October 4 via DVL Recordings.