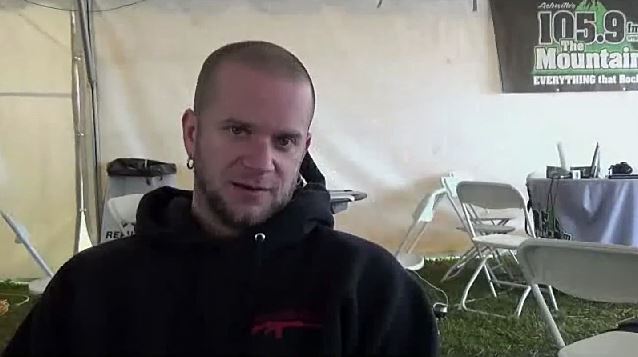 Massachusetts metallers ALL THAT REMAINS recently completed recording their new album at a California studio for a tentative January 2015 release via Razor & Tie. The follow-up to 2012's "A War You Cannot Win" was helmed by producer Josh Wilbur, who has previously worked with LAMB OF GOD and GOJIRA.

He continued: "The thing is, with us, I feel like we get… Each record seems to be kind of different in the fact that...

"Personally, I think that we have a lot of songs [on the new album] that are better.

"Honestly, the test for me is, like, when me and Josh [got] done — 'cause we wrote the melodies and the lyrics together; none of the vocals were done before I actually sat down with Josh. This is the first time that anyone has ever had any kind of input onto lyrics.

"When we first started doing this record, one of the label guys was, like, 'Oh, are you okay with these lyrics?' And he wasn't asking me, he was asking Josh. And it was a 'scream' song, so, from my perspective, if I'm screaming from beginning to end, that's my art. 'So you're gonna criticize my art, and you're the new guy?' 'Cause he was the new guy. And I'm, like, 'Oh, go fuck yourself. Now, not only am I not interested in what you're gonna say about this song, I'm not interested in what you're gonna say about anything else, 'cause you've completely destroyed your credibility.'

"But Josh is the only guy that's actually worked with me about lyrics and stuff, and it's been completely wonderful."

Asked if the new ALL THAT REMAINS album contains more singing or screaming than in the past, Labonte said: "I think the record overall is probably leaning 'sing-y.' We've got 12 songs, and there's probably four or five songs that are beginning to end singing. There's some screaming worked into two or three."

Speaking to Josh Rundquist (a.k.a. That Drummer Guy) on September 16 in Minneapolis, Minnesota, ALL THAT REMAINS drummer Jason Costa stated about the band's forthcoming CD: "Our label [has gone] through a lot of changes, as far as people who work there. And some of the new people that are just coming in, I don't know what they think that they expect from us. But we wrote a great album, and the guy who recorded our album, he absolutely loves it. And he's a Grammy-nominated dude. And he loves it and everything's fine. But the label kind of wants us to maybe write two more songs or so that are more quote-unquote radio oriented. So we'll see what's gonna happen. I think we already have enough of what we need for the album... Maybe they're right. Who knows? Maybe we go and we write two more songs and the songs end up being great. And it can't be a bad thing, right?!"

Regarding the musical direction of the new ALL THAT REMAINS material, Costa said: "The 13 songs that we have for the album, those are done, and they sound fantastic. I'm absolutely in love with this album. Usually there's a few songs on every album that we record that I'm, like, 'Eh, it could be better. Blah blah blah.' This one, not one song do I have any, like, 'Oh, it could have been better.' I mean, everything can always be better — it's kind of subjective — but I don't have any misgivings at all about... I love every song on this album."

He continued: "It definitely still sounds like us. But the heavy stuff is heavier, and the faster stuf is faster. We all really challenged ourselves on this album. And the radio stuff is more… not more radio, but there's definitely more singing, there's more melody and stuff like that. But the songs are fast; we have a lot of fast burners on this album. And the double-bass stuff for the heavier songs is really challenging for me this time. The patterns are super-hard, some of them."

ALL THAT REMAINS had a No. 2 single on the rock radio chart earlier this year with "What If I Was Nothing", which marked a stylistic departure for the band.
A previous single from "A War You Cannot Win", "Stand Up", spent three weeks at NO. 1, making it the band's first -ever chart-topper fifth consecutive Top 10 rock single.