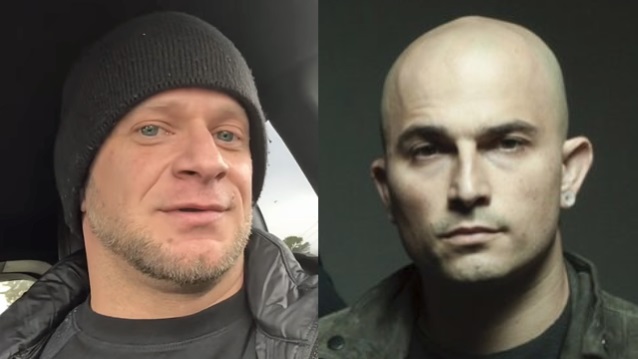 ALL THAT REMAINS's Phil Labonte has slammed TRIVIUM's Paolo Gregoletto, accusing the bassist of "riding coattails" and calling him "the third most important guy in a four-man band."

The war of words between the two musicians started after Labonte appeared on Internet provocateur Milo Yiannopoulos's InfoWars show to discuss the contentious issue of U.S. gun control in the wake of last week's mass shooting in Florida.

After video of Labonte's appearance on Milo's program was posted on YouTube, Paolo took to Twitter to call out the singer for his comments, writing: "Stick to this and not music @philthatremains" His tweet was met with a negative response by a Labonte follower who proceeded to call TRIVIUM "irrelevant" and say that Paolo's band "blows." This prompted Gregoletto to fire back with: "Sold Out 95% of our last tour in America". Phil then chimed in with "I'm just happy Paolo has time to let us know how great he is," which led Gregoletto to respond: "It's too bad your shooting skills can’t help you hit those high notes." Paolo also challenged Labonte to "go make a YouTube video about it."

Earlier today, Labonte posted a video message for Paolo in which he addressed the bassist's tweets and minimized Gregoletto's contribution to TRIVIUM's success.

Phil said (see video below): "So last night, Paolo from TRIVIUM decided that he wanted to let me know that he didn't like us, or he didn't like ALL THAT REMAINS. And so he goes and talks some smack about singing, talks some smack about how great their last tour was. And their last tour did great numbers — to everyone involved, congratulations. You guys had a great tour; it's something to be proud of. But Paolo, nobody went to see that tour because Paolo was there. Nobody cares. If you weren't there and it was some other dude, that tour would have done the same thing. You're the third most important guy in a four-man band that changes their fourth member every couple of years. Everyone knows TRIVIUM's Matt [Heafy, guitar/vocals]."

He continued: "So jumping at me talking smack? Ain't nobody calling you in the middle of the night saying, 'Come save my tour,'" apparently referring to the fact that he has stepped in to sing for KILLSWITCH ENGAGE and FIVE FINGER DEATH PUNCH on the road when those two bands' respective vocalists were unable to finish out the dates. "You didn't write the hits for TRIVIUM. You've been riding coattails."

Labonte added: "So here you go, Paolo. You wanted me to make a YouTube video about it? Here it is."

Earlier in the week, Labonte, a staunch gun-rights advocate, posted a video message in which he offered his thoughts on the gun debate, expressing his belief that a ban on semi-automatic rifles would not reduce mass shootings and insisting that this nationwide crisis of firearm injuries and deaths would not be solved by a formal change to the Second Amendment.

Stick to this and not music @philthatremainshttps://t.co/A54v1tyGf0

Wait till you hear our country cover, Joe! Maybe you’ll like us then 😂😂😂.

I don’t know. Go make a YouTube video about it and let me know.