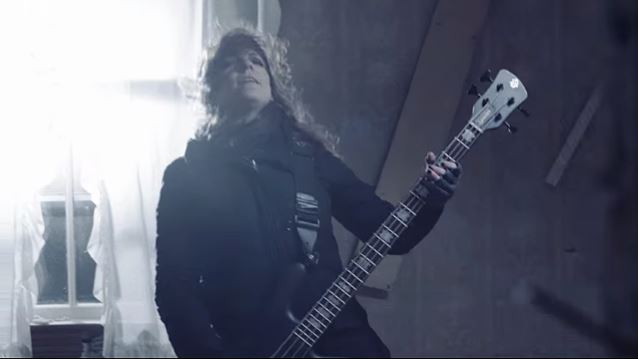 ALL THAT REMAINS Parts Ways With Bassist JEANNE SAGAN

ALL THAT REMAINS bassist Jeanne Sagan has decided to leave the band to pursue personal interests. The departure is amicable and the band will continue to tour in support of its latest album, "The Order Of Things".

"Everyone in ALL THAT REMAINS wishes nothing but happiness and success in any and all of her future endeavors.

"We are excited to announce ALL THAT REMAINS's new bass player is a fine young man by the name of Aaron Patrick. He's been a friend for years, formerly of BURY YOUR DEAD and has played for LAMB OF GOD and DEVILDRIVER, among others. We're sure he's going to be the perfect fit, and considering his musical history, I think he's going to add a new and cool dimension to ALL THAT REMAINS's sound moving forward.

"Come check us out and see Aaron rock on the 'HardDrive Live Fallout' tour!"

Jeanne Sagan comments: "It is with heavy heart that I depart from ALL THAT REMAINS. I've decided to follow my heart and pursue other opportunities in life. I truly appreciate the amazing experiences and the great fans over the last decade. I wish ALL THAT REMAINS all the best going forward."

Patrick adds: "I am beyond excited to step in and play bass for ALL THAT REMAINS! We've toured together over the years and have become close friends, so the family element is already there. I'm looking forward to kicking off this next tour in Japan at Loud Park and then onward to the 'HardDrive Live Fallout' tour. Let's fuggin' party!"

ALL THAT REMAINS will co-headline the "HardDrive Live Fallout" tour this fall with WE CAME AS ROMANS. The trek kicks off on October 14 in Grand Rapids, Michigan and will run through November 7.