Massachusetts metallers ALL THAT REMAINS will take part in a signing session at Sunrise Records in Toronto, Ontario, Canada on Friday, November 7 at 4:00 p.m. More information is available on the poster below.

"Two Weeks", the new video from ALL THAT REMAINS, can be viewed below.

The "Two Weeks" video was directed by Brian Thompson and it intersperses haunting performance footage with shots of a girl who sees the band "Poltergeist"-style in a TV and paranormal investigators attempting to track ALL THAT REMAINS' ghostly presence.

"Overcome", the new album from ALL THAT REMAINS, sold just under 29,000 copies in the United States in its first week of release to enter The Billboard 200 chart at position No. 16.

Having recently wrapped up a stint on the Vans Warped Tour and a co-headlining tour with TRIVIUM, the band will next jump aboard a full North American tour as direct support to IN FLAMES alongside GOJIRA and 36 CRAZYFISTS. 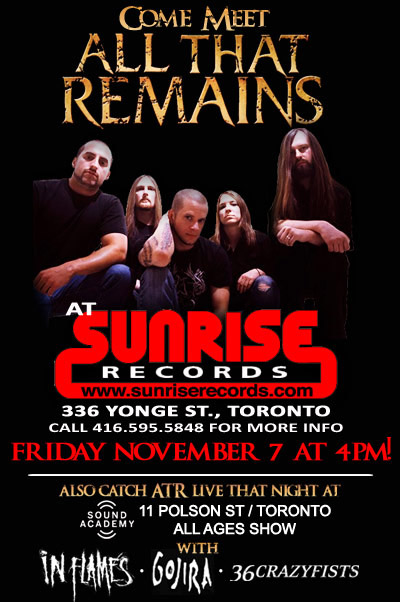