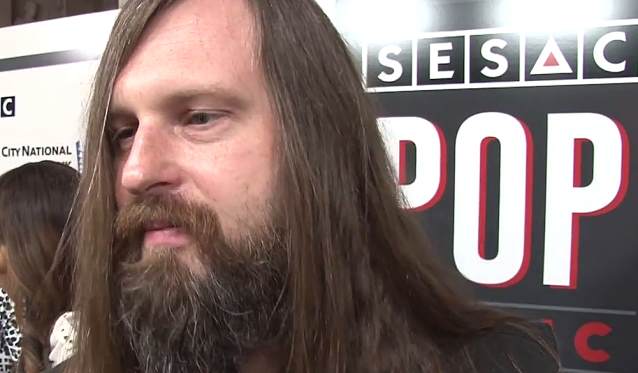 ALL THAT REMAINS Working On New Material, Hoping To Enter Studio Soon

Guitarist Oli Herbert of Massachusetts metallers ALL THAT REMAINS has confirmed that the band is working on the material for the follow-up to 2012's "A War You Cannot Win", tentatively due before the end of the year. Speaking to Artisan News at SESAC's 18th annual Pop Awards at The New York Public Library on Monday, May 5, Herbert said: "We're currently working on our new album. It'll be our seventh release. And hopefully we'll be in the studio soon and the album should be out later this year."

Pressed for more information about how the new ALL THAT REMAINS music is shaping up, Herbert said: "I can't really disclose any details. We're just writing right now, so… It's a painstaking process filled with, 'Oh, this is great,' and then the next day, 'Uh, no, this isn't so good.'"

Asked how the songwriting process works in ALL THAT REMAINS, Herbert said: "Usually, I write a lot of the guitar parts. A lot of times Mike [Martin, guitar] will have an idea or Jason [Costa, drums] will have some good drum ideas. You know, we bounce things off each other and arrangements come together. Phil [Labinte, vocals] takes care of all the lyrics. And there you go."

ALL THAT REMAINS had a huge single earlier this year with "What If I Was Nothing", which was very different for the group. Labonte told The Pulse Of Radio that not everyone in the band was on board with it at first. "There was definitely conflict in the beginning," he said. "There are people that come from, you know, a school of thought that like this is what you're supposed to do and that's what you do. But you either play inside the safe zone or you really push the envelope, and pushing the envelope is a risk. That's the thing about trying new stuff — you're not gonna know when it's gonna, you know, strike a chord with people. You have no idea."

The "What If I Was Nothing" video was directed by Rasa Acharya and Dan Kennedy of Little Sky Film (SAY ANYTHING, WE CAME AS ROMANS).