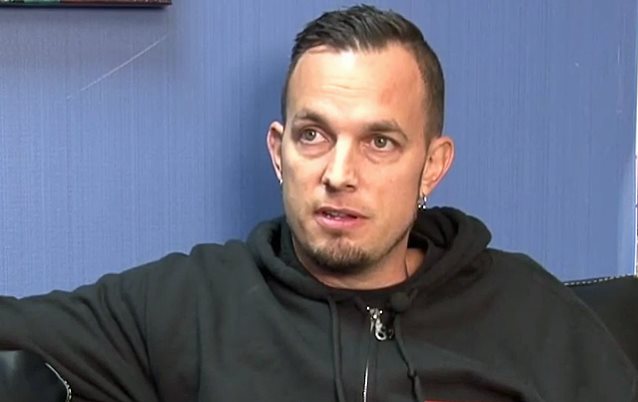 Rock powerhouse ALTER BRIDGE recently commenced recording the follow-up to the band's critically acclaimed 2013 album "Fortress". The as-yet-untitled fifth LP is once again being produced by Michael "Elvis" Baskette and is tentatively set for release in the fall.

In a brand new interview with Myglobalmind, ALTER BRIDGE guitarist Mark Tremonti stated about the progress of the recording sessions for the band's new CD: "Today I'm tracking my ninth out of fourteenth guitar track; the drums and bass are done. We are hoping to have it out the later part of September, because we have another European tour scheduled for early November and we want people to be familiar with it before we go over there."

He continued: For the first time in our careers, we are free agents. We are signing a new record deal and just trying to get the business stuff aside so we can focus on this music as we have the U.S. tour scheduled in July. We will be going out with BREAKING BENJAMIN and DISTURBED."

Tremonti will release the third effort from his band TREMONTI, titled "Dust", on April 29.