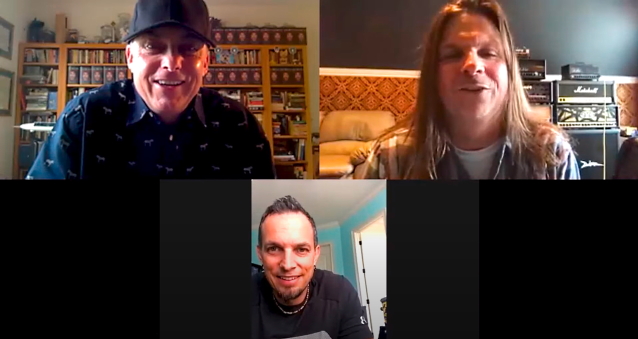 ALTER BRIDGE's MARK TREMONTI: A Lot Of The Most Talented Musicians Are Not The Nicest People

In a recent HardDrive DL roundtable, ALTER BRIDGE's Mark Tremonti and STAIND's Mike Mushok awere asked by host Lou Brutus what it is that makes a person a great bandmember. Mark responded (see video below): "It feels like every band has that one guy that kind of throws everything in the garbage for the rest of the band. I'm not gonna say anybody specifically, but it seems like there's always… I would much rather have somebody half as talented and twice as cool to be in a bus with for 10 years, 'cause it really goes a long way for your day-to-day happiness. A lot of the most talented guys out there sometimes they're just not the nicest people and they're hardest to work with. So you've gotta choose your battles and pick the most important thing. To me, it's that friendly, generous, hard-working person with the right goals and the right ambitions and that right work ethic."

Mike weighed in: "I think people that take other people into consideration and realize that 'do unto others as you do unto yourself' type of thing. If you don't wanna be treated a certain way, then don't treat somebody else that way. And I think that goes a long way, like Mark said.

"I spent years trying to find a singer before I came across [STAIND frontman] Aaron [Lewis]. And I used to remember all these guys that would show up and [be] just so determined and work so hard and always be there, and then they'd go to sing and they couldn't… Then there's that guy that would blow you off for three days and never show up, and then one day he finally shows up, and those are the guys that are always great. It's definitely one of those things that you have to figure out, and find the right combination of people that you can get along with and you can work really well together with. And like [Mark] said, pick your battles. That's really a big one that I know I kind of live by. It's, like, how important is this decision? Do I really need to start something over this or not?"

ALTER BRIDGE recently postponed its previously announced U.S. headlining tour with special guests BLACK STONE CHERRY and SAINT ASONIA due to the coronavirus pandemic that is sweeping the globe.

Mushok's SAINT ASONIA side project recently announced a "virtual tour" where the band will perform on the the different social media platforms of rock radio stations around the country. The group will add a local flavor to each performance.