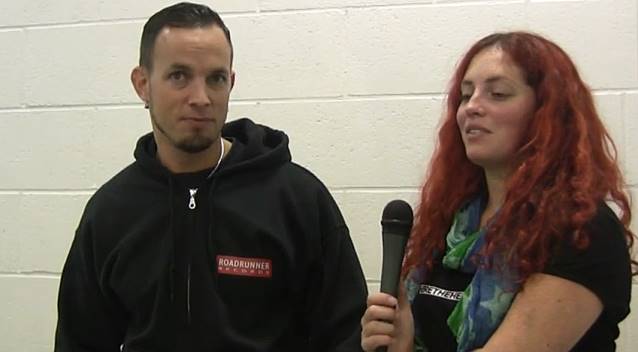 Felicity Hall of GetYourRockOut conducted an interview with ALTER BRIDGE guitarist Mark Tremonti before the band's October 22 concert in Manchester, England. You can now watch the chat below.

ALTER BRIDGE's fourth album, "Fortress", sold 30,000 copies in the United States in its first week of release to land at position No. 12 on The Billboard 200 chart. The CD arrived in stores on October 8 via EMI Label Services.

ALTER BRIDGE singer Myles Kennedy told The Pulse Of Radio that the band took a different approach to writing and recording this time around. "I think that 'Fortress' is probably the most musically adventurous record we've made to date," he said. "There was definitely an awareness when we went into this of what we would not do, which was to touch on approaches that we'd used in the past a number of times. So I think that people will hear that we took some chances on this album."

Guitarist Mark Tremonti told Music Radar that the quartet did everything they could to make the new disc as unpredictable as possible, explaining, "The last thing we wanted was verse-chorus, verse-chorus and all that. We messed with time signatures, tones, key changes. Everything we could throw at these songs, we did. They have you never knowing what you're getting next."

The first single from the new album is called "Addicted To Pain".