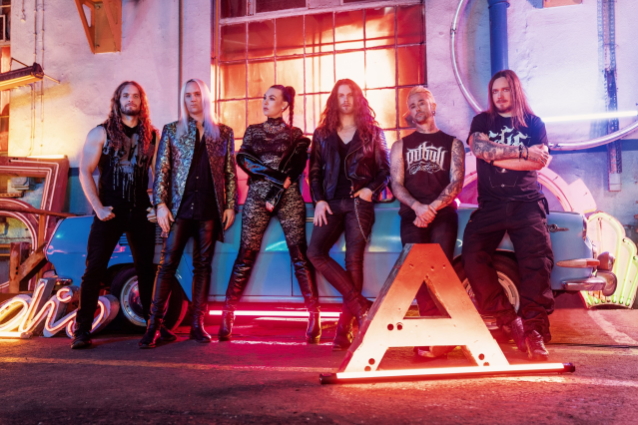 Henrik announced his exit from AMARANTHE in a social media post earlier today (Wednesday, June 8). He wrote: "I'm sorry to say that I got some sad news for ya'll! I will no longer be a part of AMARANTHE.

"After 2 years at home caused by corona, something hit me. I freakin loved being at home with my family and started to dream about doing something else. Something more important and also to NOT spend more time away from my kids. For many reasons I also slowly stopped enjoying life on the road with AMARANTHE. It became more of a job and something i pushed myself to do. Not like back in the days when I had some serious fun all the time!

"I want to thank all my fans for your support over the years and I promise I'll be back with killer 'GG6' stuff in the future when the mood and creativity finds it way back to me!

"Cheers n love and good luck to AMARANTHE in the future."

The remaining members of AMARANTHE stated: "We fully respect and understand Henrik's decision, and we wish him all the best on his future adventures. Henrik is truly one of the world's foremost growlers, as anyone who have seen him rip through our songs live knows, and we can't wait to see what he comes up with next! Keep your eyes peeled to his socials to stay up to date with forthcoming GG6 madness!"

Last December, AMARANTHE dropped a music video for its latest single "PvP" (gamer speech for "Player Versus Player"). The track, which was released in November, was the official anthem for the Swedish team at the international e-sports world championship. The clip was directed by Poland's Grupa13, which previously worked with AMARANTHE on the "Archangel" and "BOOM!1" videos.

AMARANTHE has spent the last decade establishing itself as a formidable, positive and fervently melodic force for metallic good. From their explosive self-titled debut in 2011 to the more sophisticated, streamlined likes of 2014's "Massive Addictive" and its immaculate follow-up "Maximalism" (2016),AMARANTHE has masterfully blurred the lines between melodic metal, crushing brutality, cinematic sweep and futuristic sparkle. Led by the endlessly ingenious songwriting of guitarist Olof Mörck and powerhouse vocalist Elize Ryd, their rise to prominence has been a joy to behold.

Widely acclaimed as a dazzling live act, the Swedes reached a new peak of creativity on 2018's hugely successful "Helix": an album that pushed the band's vision to new heights, breadths and depths, while showcasing the brilliance of Elize and her co-vocalists, Wilhelmsson and recent recruit Nils Molin.

After 9 years and four albums together, Henrik "GG6" Englund Wilhelmson has now chosen to end his journey with...