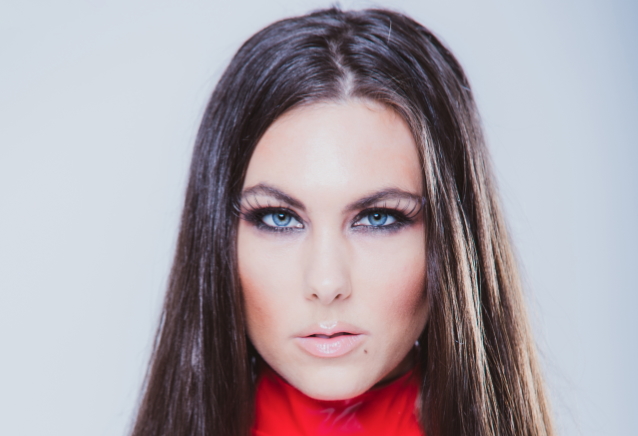 AMARANTHE singer Elize Ryd recently appeared on the "Side Jams" podcast to speak with host Bryan Reesman about being an adrenaline junkie, pushing her boundaries, and how that relates to the "terrifying" experience of being onstage. She also expressed interest in other pursuits like dancing, theater, and criminology. A few excerpts follow:

Elize started scuba diving when she was 15:

Elize: "I used to be very interested in extreme sports when I was younger. I was unaware of danger, so I was 35 or 40 meters [115 to 130 feet] underwater. I was doing the advanced scuba diver license. I actually was kind of serious about it. I thought I could do anything. We did these night dives which were kind of scary because you couldn't see anything. It was pitch black. The next step would be rescue diving. I could save other people. But anyways, I was also very busy with the school, like most other kids, and I had some extra jobs. And I live in Gothenburg and don't know anyone here who does scuba diving, so I couldn't really continue with that, unfortunately.

"I still love water. I'm kind of scared of the ocean in general. It's deep, and you don't know what's underneath. When you're in the water and you can actually see everything, that's fine, that's not scary at all, but when you're on the surface and can't see anything that's beneath, that's scary."

Her worst experience underwater happened when she lost her flippers:

Elize: "I wanted to test the boundaries. I was actually not allowed to go any deeper, but I wanted to go deeper even though it was kind of dangerous. And then I lost one of my shoes and could see it disappear, but there was an instructor diving after it. At one point, I pushed the wrong buttons [on my air tank]. I was about to go down, but then I could see the small particles [air bubbles] going down, but that doesn't make sense. Then I was going way too fast up to the surface [and my blood vessels burst]. There was blood all over the water, and I never had that kind of headache. It was kind of scary."

Elize: "I like exciting things. I also like high jumps [rappelling]. I didn't do bungee jumping yet. I've wanted to do that. But I was climbing in mountains, like 50 meters above the ground. My hair got stuck in those little ropes. That was the most scary part. You push yourself down from the top of the mountain and go straight down. So if the snare would break, you would die. One of my interest is stunts — super scary, extreme things that you wouldn't necessarily imagine girls doing. I like super high heights or super deep, deep, deeps. You get a totally different perspective of everything. There's a whole other world underneath the surface that most people probably don't think about. And then of course, there is a whole world above."

She loves racing on motorbikes and BMX bikes:

Elize: "I was driving a motorcycle on jumps. I just had a little protection on my knees. I ride these Puch Dakota motorbikes, not the real motorcycles on the road. I've been doing that since I was a kid. Actually, I wanted to become a professional BMX cyclist. I practiced everyday when I was a kid until I split open my leg, and I still have a very big scar from that. Then it wasn't fun anymore. I did stop. It was too painful. We also moved, so I didn't have that opportunity anymore to go around. I ruined my bike as well, and I couldn't afford to buy a new one."

She likes being on stage in front of large crowds, but...

Elize: "It's also very scary, I have to say. It's terrifying. That's the good thing. When you constantly go for [facing] fears, you realize that you can survive them. That's kind of a nice feeling. And that's probably what makes me an adrenaline junkie."