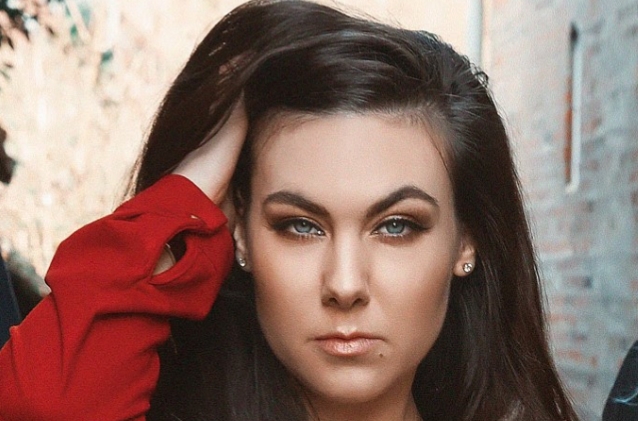 AMARANTHE's ELIZE RYD: 'It Felt Natural To Me To Listen To Metal'

On whether she thinks AMARANTHE has created a new style of metal by combining dance, techno and traditional metal elements:

Elize: "I have that impression. That's a combination of music I've always loved, and to be able to create that in one package is quite incredible. I mean, we wanted to do it anyway, but we didn't know it would [be] so much appreciated. For example, I love to listen to Euro disco. I loved E-TYPE, for example, and BASIC ELEMENT, like that extreme music, that really made me energetic and enthusiastic. Then my father listened to metal and my brother was a growler in the underground Gothenburg scene, so that inspired me a lot. It has inspired me in that it felt natural to me to listen to metal. It was kind of raw. I thought metal people were much cooler and much more funny than regular [people]. Like, they could express themselves in a way that was allowed. That's why my father became a fan of metal as well. It was okay to be that expressive about yourself and not so [reserved]."

Elize: "The thing is that we got very inspired to bring in the heavy riffing because Olof [Mörck] is obviously a great guitarist. Also, Morten [Løwe Sørensen], I wanted him to play the technical drums that he can do and also Olof so we were focusing on giving the instrumentals more space on this album because on the previous one, it was some kind of experiment between two albums. It was maybe that playing the songs wasn't so hard for Morten, even though he loved the songs and it's nice live. For him, to really show his capabilities of being a drummer, so it's nice to be able to know that hopefully people who listen to this album will get inspired to start to pick up their instruments and really practice."

On whether "Helix" is a heavier album than its predecessors:

Elize: "It is much more heavy. I also missed that when it came to the songwriting because we got so much out of doing the 'Maximalism' album. We could relieve that part of ourselves, so now, I felt it's actually very nice to be more aggressive to have that backup from the music and I can't wait to go on tour with this album. It's going to be very fun to see where it takes us live."

On whether it's true AMARANTHE recorded "Helix" in two months:

Elize: "That is actually true, yes. It's true also that we wrote the album in two months, then we went into the studio, then we recorded for two months, I think two and a half. It is very fast. We knew already in June of 2017 that we were going to record the album in March of 2018. Then, we had so many tours. I got very sick and everybody was tired and exhausted, so there was nothing happening on the songwriting until January because we couldn't find any space for that. When we could find space, I needed to recover because I'd been sick for three months. It was just no time for it. Then we kind of decided. I just knew I needed to rest a little bit then I would be back in the game. We decided, 'Okay, in January, I'm going to be back and healthy again, well-rested, so let's start to work on the album.' Then we just did that, and we wrote two songs in one week to be able to make it when the recording started in the studio. We had finished almost everything except for a few parts in the lyrics. It was not stressful, but it was a very creative process. Actually, I did like it to know that I don't have time to think so much. I just go with it. Not like analyze it for months. It was good we could make it [in time]."

On how AMARANTHE divides up songwriting with three singers in the band:

Elize: "For Nils [Molin, vocals], for instance, he was now so busy, he was writing his own album for DYNAZTY at the same time we were writing this album. He didn't write any lyrics or vocal melodies on this. Henrik [Englund Wilhelmsson, vocals], he comes up with ideas, but he's not so much into songwriting, which is also something that is hard for me to understand because I think every person wants to write songs. There are actually people who don't like that or feel like that they can't do it. Fair enough. When we do that, they can stay at home. Henrik has a family, which he gets the time to be with. He lives in Stockholm, Olof lives in Gothenburg, so when we work on the album for two whole months, he could be with them. Meanwhile, we were doing the job. So, it's a very luxurious situation for the people who aren't working with the business or songwriting. So, I'm happy for them. Let's see the future, I don't know. Like I said, every member inspires a lot. We send demos so everyone can have their opinion and go 'I think this could be something.' And they can think how they want to represent the new music, so it's very nice."