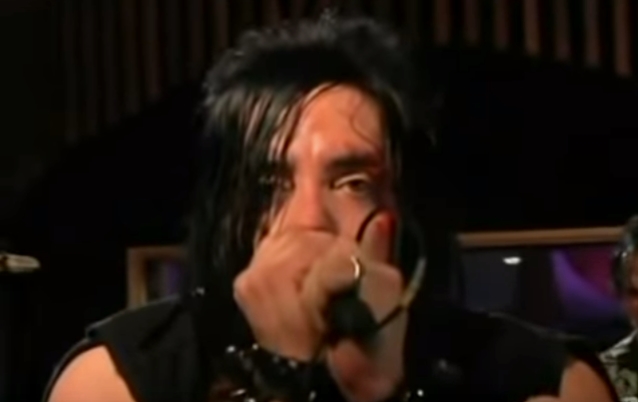 According to TMZ, AMEN frontman Casey Chaos has been arrested for allegedly assaulting a woman at his Los Angeles home.

The singer got into an argument with a woman early Tuesday morning and the dispute eventually turned violent. Police were called, and when they showed up, they found the woman with a bloody face. The alleged victim refused medical aid on the scene.

Casey, whose real name Karim Chmielinski, was arrested and booked for felony domestic violence. However, TMZ reports that Casey told cops the woman is not his girlfriend, and he was adamant they aren't in a romantic relationship.

Casey's attorney, Elon Berk, told TMZ: "It's clear that these accusations against Casey are absolutely false. The house where the alleged incident occurred was full of witnesses who have all given statements to police and are willing to testify in court as to the falsity of these accusations."

AMEN's last collection of new studio recordings, "Death Before Musick", was released in 2004 through EatUrMusic — a Columbia Records imprint owned by SYSTEM OF A DOWN guitarist Daron Malakian.

AMEN has been virtually inactive since it reunited for an October 2014 performance at Knotfest in Devore, California. Sitting in on drums at the show was former SOULFLY and current STONE SOUR sticksman Roy Mayorga.

As for 2015, AMEN was said to be putting the finishing touches on a new album with producer Ross Robinson (KORN, LIMP BIZKIT, SEPULTURA),but that effort has yet to see the light of day. Joining Chaos, bassist John Fahnestock and guitarists Duke Decter and John King in the studio was former SLAYER and current SUICIDAL TENDENCIES drummer Dave Lombardo.