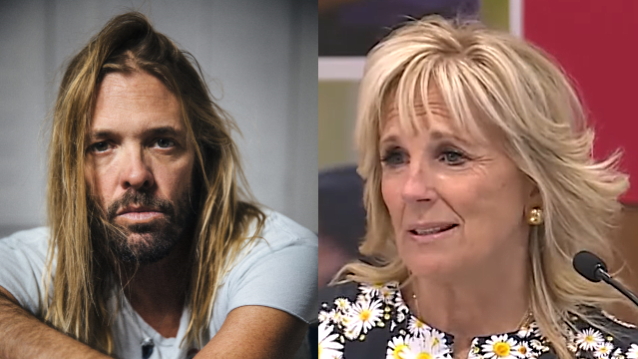 Jill Biden, America's first lady, was among public figures mourning the death of FOO FIGHTERS drummer Taylor Hawkins, who passed away Friday evening (March 25). He was 50.

The band announced the loss on social media, calling Hawkins's death "tragic and untimely." He was found dead in a hotel room in Bogota, Colombia. A cause of death has not yet been announced, but a preliminary report from the Colombia's Attorney General's Office found Hawkins had 10 different substances in his body, including "THX (Marijuana),tricyclic antidepressants, benzodiazepines and opioids."

"Sending love to Taylor Hawkins' family and fans of the FOO FIGHTERS everywhere."

In January 2021, the FOO FIGHTERS were part of the virtual "Celebrating America" concert special for Joe Biden's inauguration, during which they performed "Times Like These".

Hawkins was a vocal opponent to former U.S. president Donald Trump on several occasions in recent years. In a 2017 interview with Onet News, Taylor stated about the political climate in the United States: "It's insane, but it really is a mirror image of our culture in America right now. So people blame [Trump], but he's just a symptom of a generation of reality TV-obsessed, selfie-obsessed, Facebook-obsessed, tweet-obsessed, self-obsessed people. So we got that president because I think, unless the Russians really did hack in, we got what we deserve."

"I think in a certain way, it's a good chance for people to take a look at where we are as a culture and say, is this where we want to be?" Hawkins continued. "An orange, fake-haired, tweeting president who tweets childish remarks about people who say little mean things about him, because that's where we are right now. It's a fricking weird freaky time, but it's really representative of where our culture is right now."

In February 2021, FOO FIGHTERS frontman Dave Grohl told Tom Power, host of "Q" on Canada's CBC Radio One, about the experience of performing at Joe Biden's inauguration: "You have to understand that sometimes it seems so surreal that I feel like I'm standing beside myself and watching it happen. I've actually written a little bit about how it's like your life flashing before your eyes as it's happening. So it's strange.

"It's hard for me to connect all of those dots, because there is a lot of 'full circle' going on there," he continued. "I grew up outside of Washington, D.C. My father was a Republican speech writer. He was involved in politics. I spent time on Capitol Hill.

"So, putting all those things together, with the the First Lady, Dr. Jill Biden, being a teacher, and my mother being a public school teacher for 35 years — retired now — all of these things kind of connected together to then this performance of a song that I wrote 18 years ago that's not a political song at all. It's just a song about hitting some crossroads in your life where you feel that you need some sort of rebirth, or some restart. But you have hope."

Grohl added: "I've always thought that when someone dear to you, someone close to you passes away, you have to start all over again. So you have to do everything in life all over again — your first cup of coffee since you've lost that person; your first trip to the grocery store since you've lost [that person]; and so on and so on and so on. It's basically what that song's about — about learning to love again, learning to live again; things like that.

"I think the reason why we were asked to perform was because, in the States, we need that. So it's a rebuilding in a hopeful way. And I think that's why they requested that we play that song. And it was an honor."

Back in 2018, Grohl said that he was "ashamed" of having Donald Trump as the U.S. leader, explaining that the billionaire real estate mogul "seems like a massive jerk."

"Today, the American Dream is broken," Grohl told the British GQ magazine at the time. "I've probably travelled internationally more than our current president and the one thing I understand that he doesn't is that the world isn't as big as you think it is. It is all in your neighborhood. India, Asia, Iceland aren't other solar systems. I am ashamed of our president. I feel apologetic for it when I travel."

In 2017, Grohl said in an interview with Switzerland's SRF 3 that criticism of Trump's extremist rhetoric by musicians and Hollywood stars only served to embolden and fuel his base. "I think that for years maybe they felt like the minority and now all of a sudden there's a voice that they can sort of attach themselves to, and the more pushback they get from that, it's like the stronger they feel in a lot of ways," Grohl explained. "So all you can do is fight the good fight every day when you wake up and try to be a good person and treat everybody with respect."

Asked how he, as a responsible parent, talked with his kids about the often-inflammatory behavior we saw from America's 45th president on a daily basis, Grohl told SRF 3: "I remember the night of the election, I had to sit down and have a talk with my daughter. She was terrified, man. And I basically told her what I'd just told you. I was, like, 'You can't give up hope. You just have to fight the good fight. And the things you believe in… You have to stand up and represent the things that you actually believe in.' That's what everybody should do. But I think it's hard for a kid to understand that."

Sending love to Taylor Hawkins’ family and fans of the Foo Fighters everywhere.