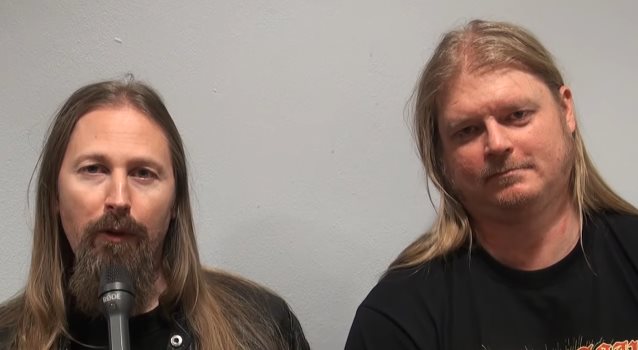 Finland's Kaaos TV conducted an interview with guitarists Olavi Mikkonen and Johan Söderberg of Swedish death metallers AMON AMARTH on December 13 in Helsinki, Finland. You can now watch the chat below.

Speaking about the songwriting process for AMON AMARTH's latest album, "Jomsviking", Olavi said: "I don't know if the listener is really gonna hear it too much, but we had a different approach on the album. Johan [Hegg], the singer, he wrote a movie script. So we saw the whole thing as a movie. So we basically took the movie script and cut it into ten pieces. And then we [were], like, 'All right, this is one song. This is one song.' And then we started to work against that. We had already ideas for, let's say, five or six songs that we easy to match in where they fit musically. But then we had a lot of gaps where we had a really aggressive lyric but we didn't have any aggressive [musical] ideas. So we just had to work towards making aggressive ideas. That's something we'd never done in the past. In the past, we always [used] whatever [musical ideas] we had and then we made lyrics that fit the song. So now we had to fit the lyrics. And that was really cool; I think it was exciting. And I think that's the album that we've been bouncing ideas back and forth the most as a band unit."

Jocke Wallgren was named AMON AMARTH's new permanent drummer in September. Jocke had been sitting behind the kit for all shows on the group's current "Jomsviking" world tour.