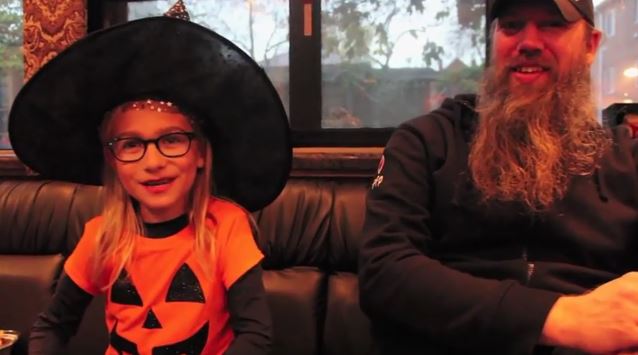 Piper of KidsInterviewBands.com conducted an interview with vocalist Johan Hegg of Swedish death metallers AMON AMARTH on October 19 at the Newport Music Hall in Columbus, Ohio. You can now watch the chat below.

Asked if he could hold a world record, what it would be for, Hegg replied: "Probably sleeping the longest. My family is always complaining I always sleep all the time. Too long."

AMON AMARTH's ninth studio album, "Deceiver Of The Gods", sold around 17,000 copies in the United States in its first week of release to land at position No. 19 on The Billboard 200 chart. The record, which arrived in stores on June 25, 2013 via Metal Blade, was recorded at Backstage Studios in Derbyshire, United Kingdom, and was produced, mixed and mastered by Andy Sneap (OPETH, MEGADETH, EXODUS, ARCH ENEMY, KILLSWITCH ENGAGE).