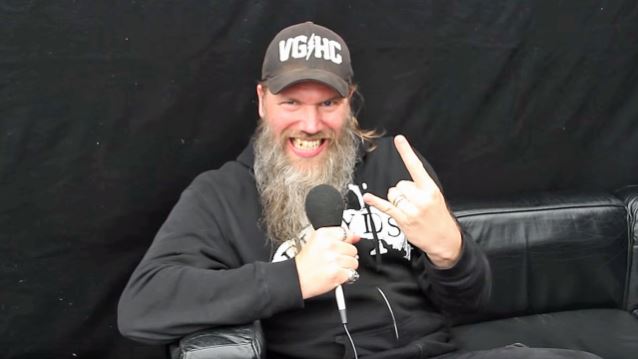 Vocalist Johan Hegg of Swedish death metallers AMON AMARTH was interviewed by Kerrang! magazine at this year's edition of the Download festival, which was held June 10-12 at Donington Park in Leicestershire, United Kingdom. You can now watch the chat below. A couple of excerpts follow (transcribed by BLABBERMOUTH.NET).

On whether any fans have accused AMON AMARTH of selling out now that the band's latest album, "Jomsviking", was released via Sony Music internationally:

Johan: "Not because of that, I don't think. There's always gonna be a bunch of people calling bands sellouts when they become popular, but if you really listen to what we do musically, it's not a big difference from what we started out doing; it's just that we got slightly better at it. [Laughs] We got slightly more budget to record our albums so we could put more effort into the production. That's it. We always try to write very epic songs mixed with brutal songs; that's always been our thing, and I still think we do the exact same thing. So I don't know… I don't really care what people say. I know that we never compromised what we do musically or anything."

On the state of the metal scene :

Johan: "The state of metal right now, in 2016, is really, really good. There's so many good bands around these days. And even though there's some tragic losses over the years — I'm thinking about Lemmy leaving us way too soon, if you ask me; Ronnie James Dio, same… like, old-school heroes leaving us — it's really tragic. I see that there is a young generation of really good bands coming up that are willing and ready to step up and at least try to fill those enormous shoes. Just look at festivals all across Europe and even at Download and everywhere; there's tons of bands, and the fans come out in heaps to watch metal. It's great."

"Jomsviking" was released on March 25 via Metal Blade in North America and Sony Music internationally. The first concept record in AMON AMARTH's storied career tells a tragic tale of love and revenge, backed by the Swedes' trademark melodic, anthemic metal, which was produced and mixed once again by Andy Sneap (MEGADETH, TESTAMENT, ACCEPT) and also features special guest session drummer Tobias Gustafsson (VOMITORY). The epic original story is set in the world of the Jomsvikings, the legendary order of mercenary Vikings.