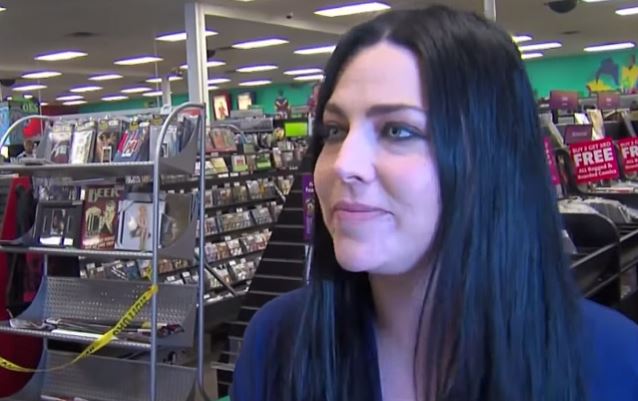 EVANESCENCE singer Amy Lee, who became a first-time mother last month, has confirmed to RollingStone.com that she doesn't "have any plans to do anything with the band" for the foreseeable future.

"The situation is we're not doing it now," she said when asked about EVANESCENCE's current status.

"I don't like to make predictions about the future, because I'm honestly open-minded, and I would never want to say I'm done with any of it, because it's a huge part of me.

"I've loved my time with EVANESCENCE, I wouldn't want to just throw it away, but, for the foreseeable future, I don't have any plans to do anything with the band.

"It's really important to me to take some time to show some different sides of myself.

"I've said this all the way through EVANESCENCE, especially on the second and third record: 'I have the freedom to express myself completely within the band, so why would I want to do anything else?' And that's true only to an extent, because as much as I could go through a range of emotions, there's a certain expectation there.

"With the fans, with myself, I know what EVANESCENCE is; it's an entity, it's bigger than just myself, which is awesome, but I can write a song and go 'That is or isn't an EVANESCENCE song,' and they both happen. So there does need to be other outlets for me to make music."

Lee sued her longtime record label, Wind-Up, in January for at least $1.5 million over unpaid royalties and other alleged misdeeds. Lee alleged in her lawsuit that the company attempted to sabotage the band's career. The lawsuit has since been settled.

Asked about the factors that led to legal action and the ramifications of the settlement, Amy told RollingStone.com: "I can't say anything negative; I had to sign a non-disclosure, so that's the only way in any sense that I'm still bound.

"Everything's still the same for me; it's not like I no longer get paid any money when someone buys [EVANESCENCE's debut album] 'Fallen', but they sold it to somebody else. My back catalog is owned by this company Bicycle-Concord, and they're great, so there's nothing different there. But my future is mine, so anything I do from here forward is up to me, and it's awesome."

Lee will release a new album, "Amy Lee Featuring Dave Eggar: Aftermath", on August 25 via 110 Records, Inc. The disc is a film-score collaboration with Dave Eggar for the movie "War Story", which premiered in January at the Sundance Film Festival in Park City, Utah.

Lee gave birth to a son named Jack Lion, on July 24. According to People.com, Jack Lion entered the world weighing seven pounds and 13 ounces. The 32-year-old Lee wrote on Instagram, "I have never known the depths of my heart till now. The world just exploded into Technicolor." Lee has been married to Josh Hartzler, a therapist, since May 2007. The couple live in New York City.

EVANESCENCE's third, self-titled album debuted at No. 1 on the Billboard 200 when it came out in 2011.

The band toured through mid-2012 in support of the CD, but has been inactive since then.