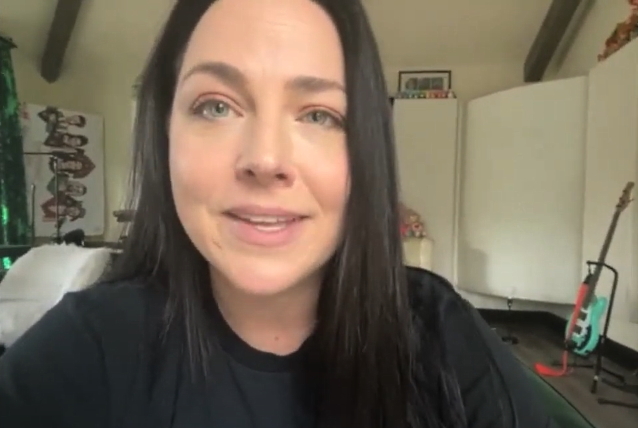 Earlier this month, EVANESCENCE postponed the remaining five shows on its U.S. tour with HALESTORM due to multiple COVID-19 cases within the touring party. The concerts in Cincinnati, Pittsburgh, Camden, Newark, and Worcester, which were originally scheduled to take place between December 12 and December 18, will now happen at the end of January.

Speaking to Terrie Carr of the Morristown, New Jersey radio station 105.5 WDHA about the show postponements, EVANESCENCE singer Amy Lee stated (as transcribed by BLABBERMOUTH.NET): "Basically, it was a day before my birthday. And we are all vaccinated, so the cases that did pop up are pretty mild symptoms. But within our touring party, there was several cases [that] popped up. We test every day, so we knew right away. And we were able to lock it down right away. And I think that is key.

"Our protocols are crazy," she continued. "We are always masked except when we're onstage or in a dressing room without anybody in there. It's a whole thing to do, but it's the right thing to do. And there's the element, I think, for all of us in the world, there's a part of it that you can't completely control, and that's other people, so you have to do everything you can and know that even being vaccinated, even wearing your mask, all that stuff, you still, especially when you're going to places, like a show or anything else, you have to have all those things in place and also be flexible and know that stuff happens and you can still get it and you can still pass it to somebody else. It's a community effort. We have to think about each other, not just ourselves, and just do the best we can with the time that we're living in. The fact that we are able to go out there and make this happen is a wonderful thing; it's to be grateful for, and I am.

"We have such a good team," Amy added. "And HALESTORM was really super flexible. It wouldn't have been the same thing if we couldn't all be back together doing a show. We have the same venues and HALESTORM and LILITH CZAR and the whole thing just in a couple of weeks. So it's really the best-case scenario for how that could have gone, and I'm stoked that we're gonna be right back."

EVANESCENCE and HALESTORM's tour kicked off on November 5 at in Portland, Oregon and was scheduled to run through December 18 in Worcester, Massachusetts.

EVANESCENCE and HALESTORM first toured together in 2012. Lee later guested on the track "Break In" on HALESTORM's 2020 "Reimagined" EP and HALESTORM frontwoman Lzzy Hale lent backing vocals to the EVANESCENCE song "Use My Voice" and appeared in the accompanying music video.

EVANESCENCE was on tour supporting this year's "The Bitter Truth" album. HALESTORM was promoting its latest single, "Back From The Dead", which recently became the band's sixth No. 1 at rock radio.