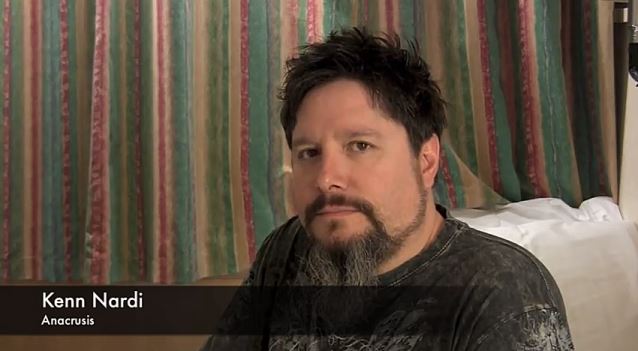 Audio samples of 14 of the songs songs that will appear on "Dancing With The Past", the forthcoming album from vocalist/guitarist Kenn Nardi of St. Louis, Missouri-based progressive/melodic thrash metallers ANACRUSIS, can be streamed below.

"I haven't decided whether to release it as ANACRUSIS or just a solo project," Nardi told Heavy Skull in a recent interview. "The music was all written with the intention of being ANACRUSIS, but I am playing everything myself aside from a handful of songs that John [Emery, bass] had already recorded the bass parts on.

"The idea was to track everything against programmed drum parts, so I could begin the process without having to record all of the drums first. Then we would go back and have Mike [Owen, drums] play the drums and replace them that way. We just never got far with them learning their parts and were not getting anything accomplished while I was still writing and tracking new songs. With so much new material, it would take forever with our current schedules to finish it, and I really wasn’t sure if John and Mike were really into doing it at all. Eventually, I just decided to do it all myself. Maybe this isn't the best way, but I did want to finish it and I am very happy with the results. I am also much happier to do what I want without having to get agreement from the other guys. Maybe they didn't like the direction I was headed musically. I don't know, but I am very excited about these new songs and I think this will be a metal album like none that has ever been done (or at least that I've ever heard)."

He added in an online posting: "Eliran Kantor is once again working on the cover art and I am also excited to see what 'face' he will give this album.

"As I said before, there will be be 28 songs, including one instrumental, and will range from mid-tempo 'classic' metal to thrash to doom along with some more mellow stuff, lots and lots of melody and even a brand new version of 'A Little Light' from my CRUEL APRIL project.

"Some of the songs originally reach back as far as 1994, shortly after the breakup of ANACRUSIS, some were written several years ago, some during our 2009-2013 reunion and others in recent weeks, so it will really represent 20 years of musical creativity that I have attempted to pull together into one cohesive collection of songs.

"The running time of the album will be approximately 2 hours and 40 minutes. That's just about as much music as can be crammed onto two CDs. It would also be great to do a vinyl version, but I'm afraid it would have to be a box-set just to fit everything in."

According to Sputnik Music, "Dancing With The Past" will feature the following track listing: