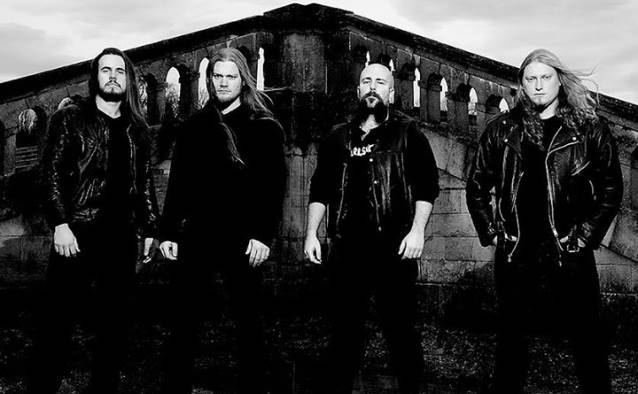 Candlelight Records has announced the signing of ANCIENT ASCENDANT.

ANCIENT ASCENDANT is a British-based quartet pioneering a unique brand of songwriting based on a solid foundation of black and death metal while injecting eclectic ideas from a wide range of fine metal traditions.

Since the release of its critically acclaimed debut EP, "The Heathen Throne", ANCIENT ASCENDANT has shared the stage with black metal monsters 1349, death metal legends BOLT THROWER (who personally invited the band to support them),ROTTING CHRIST, FLESHGOD APOCALYPSE and BLOOD RED THRONE, to name a few.

2011 was a hugely successful year for ANCIENT ASCENDANT, which saw their highly rated debut album, "The Grim Awakening", being released by Siege Of Amida Records, as well as signing to the renowned Factory Music booking agency. Quickly following up on this with their second EP, 2012 saw the release of "Into The Dark".

2012 also saw the band completing a successful U.K. tour with gore metal legends ABORTED, playing a packed out Sophie Lancaster stage at Bloodstock Open Air, as well as sharing a stage with the masters of Teutonic thrash SODOM.

2013 began with a busy touring schedule, travelling the U.K. and Ireland with ENSLAVED and WINTERFYLLETH, then as main support to HYPOCRISY. The rest of the year was spent writing and recording their second full-length album, once again with Dan Swanö at the helm.

The follow up to the 2012 EP "Into The Dark", ANCIENT ASCENDANT's new full-length album continues in the style the band has honed over the last six years while raising the bar in every conceivable way. More extremity, more melody, more groove and more evil.

Says ANCIENT ASCENDANT in a statement: "We are so proud to be signing with the legendary Candlelight Records.

"Not only do we get to work with the great guys that run it, we get to share a roster with our good friends in XERATH, WINTERFYLLETH and EASTERN FRONT. Not to mention other bands like PESTILENCE and IHSAHN who have greatly influenced us to be the band we are today.

"We look forward to a long and prosperous relationship with such a great label."

ANCIENT ASCENDANT will be on tour in April supporting PESTILENCE across Europe.