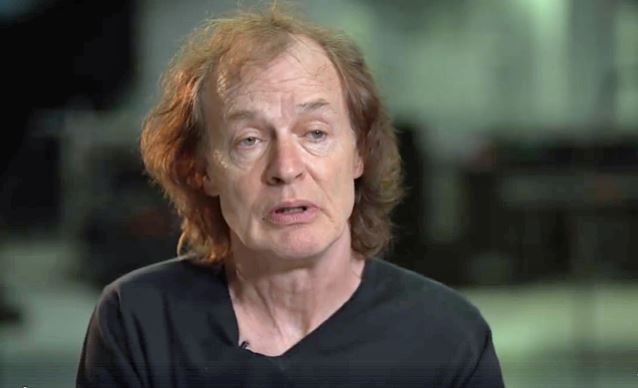 AC/DC guitarist Angus Young says that he hasn't made a decision yet regarding the band's future after the "Rock Or Bust" tour ends.

AC/DC bassist Cliff Williams recently revealed that he will retire from recording and touring after finishing out the band's current world trek. Williams' decision follows a string of personnel changes for the group that started with co-founding guitarist Malcolm Young's departure in 2014 after he was diagnosed with dementia. Last year, drummer Phil Rudd was sentenced to house arrest after he was found guilty on a drug charge, while earlier this year singer Brian Johnson was forced to step down or face the loss of his hearing.

Asked by Rolling Stone in a new interview if he thinks Cliff's decision to retire is related to Brian leaving, Angus said: "Cliff made it known before we'd even started touring — this would be his last. Besides myself, Cliff has been there the longest, since 1977. Cliff and Brian are in the same age bracket. They like to go out, hit the pubs. They had the bond."

Regarding whether he has thought his own future after the tour ends, Angus said: "At this point, I don't know. We were committed to finishing the tour. Who knows what I'll feel after? When you sign on and say, 'I'm gonna do this and that,' it's always good to say at the end of it, 'I've done all I said I would do.'

"That was always the idea, especially when we were younger — me, Malcolm, Bon. You had to show up and be on time. You'd be playing in a pub in the afternoon. Then late at night, you'd be playing a club. You got into that habit: 'If we don't play, we don't eat.'"

Williams announced his decision to retire from AC/DC during a recent interview with Gulfshore Life. He said: "It's been what I've known for the past forty years, but after this tour I'm backing off of touring and recording. Losing Malcolm, the thing with Phil and now with Brian, it's a changed animal. I feel in my gut it's the right thing."

The 66-year-old Williams is the longest serving member of the group after co-founder and sole original member Angus Young. He joined the band in mid-1977 and made his debut on its fifth album, 1978's "Powerage", appearing on every record and tour since.

Williams said about his long stint with the group: "When you start out, you kind of hope for success. That's what you are working for. But you never really know. It's been surreal, really."

Assuming neither Rudd nor Johnson return, Williams' exit means that only Angus Young remains from the lineups that recorded classic albums like 1979's "Highway To Hell", 1980's "Back In Black" and 1981's "For Those About To Rock...We Salute You".

The rescheduled dates of AC/DC's North American tour — which will be the band's first concerts here with GUNS N' ROSES singer Axl Rose on lead vocals — will kick off in Greensboro, North Carolina on August 27.