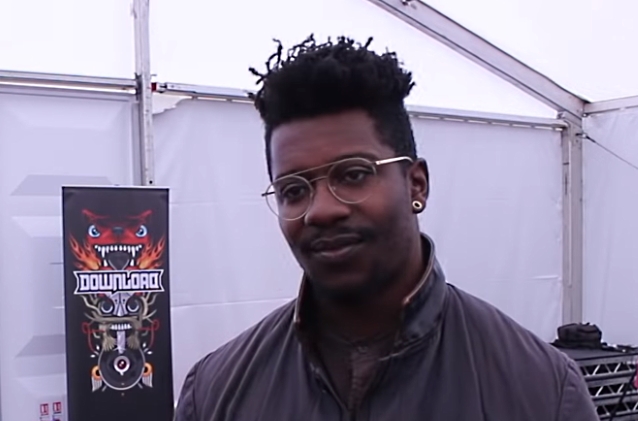 ANIMALS AS LEADERS Guitarist: 'We Roll The Dice On Every Song'

Prior to ANIMALS AS LEADERS' performance at this year's Download festival at Donington Park in Leicestershire, England, guitarist Tosin Abasi spoke with The Metal Tris. The full conversation can be seen below. A few excerpts follow (as transcribed by BLABBERMOUTH.NET).

On what he's learned during ANIMALS AS LEADERS' 10 years of existence:

Tosin: "That 10 years goes by very fast. It didn't feel like 10 years. I think touring right now, knowing that it's been 10 years and having people still show up, we can make contact with the reality that this is a thing that will last. Which is not a question that we necessarily had, but it's interesting to hold in your mind, 'Oh, wow, it's been a decade of us playing these songs,' and people are still here, as energetic as they were from year one, if not even more so, and there's new people always coming. To me, that's the coolest experience of it – the feeling like I can continue to do this and people are into it."

Tosin: "That is, like, the easiest song to play. Muscle memory's funny like that... That song was just one of many songs. I didn't think it was particularly [special]. That song was older than the first ANIMALS AS LEADERS album. I was in a band called REFLUX, and that was one of the last songs we wrote. This is, like, 2004. I just repurposed it as an instrumental tune and we added some bits. I was interested in making very aggressive but very progressive music — some electronic bits and a lot of harmony and rhythmic ideas, and then the shred and heavy parts. That was the formula for the first album in general."

On the band's evolution:

Tosin: "We're always evolving. I don't know if your wardrobe is the same from 10 years ago. Maybe it is, but you're always you, but you're always going through these subtle shifts of interest. I think as a guitar player, I was very into the shred stuff. That's, like, a big, bright shiny object, and then you start to look for different stimulus within the same field. For me, a lot of these jazz guys are doing a lot of harmony that you don't hear anywhere else, and it start to become really attractive to me, so my sound started to incorporate more sort of jazz, advanced harmony over time."

On the key to writing memorable instrumental music:

Tosin: "I think the traditional answer would be a top line, or something that would exist as a vocal line. If you can compose in a way where the listener has a clear melody to focus on, that would be a center point, but we're very riff-oriented, so a lot of our songs are built in phrases, and we're loop-oriented too, so we have a different songwriting approach where it doesn't really utilize a lot of the same classic songwriting approaches. We roll the dice on every song, so the structure is often very different from song to song."

On the key to the rise of the "djent" movement:

Tosin: "At the time, I think the intersection of online communities, processing speed and high-speed connections being more prevalent, so now you can download software and have a computer strong enough to run drum sampling software or recording software, and this stuff becoming cheap enough to have a lot of people owning it, it created studios inside of everyone's apartment or bedroom. Some of the metalheads who were into metal started being to create their perfect idea of metal, and I think the whole djent movement — FELLSILENT and TESSERACT and CHIMP SPANNER and Misha Mansoor — they were just guys who were, like, recording engineer/musicians who were metalheads sharing their own demos. It was, like, the emergence of this whole wave of intelligent metal. I worked with Misha on the first album, so we're kind of part of that first wave."

Tosin: "Victor Wooten is the hub for tapping and for slap or thump stuff. He, in my opinion, took those two techniques a lot further than anyone else I know who isn't simply a tap person. That's where I grabbed a lot of that stuff."

Tosin: "There is new music coming after this tour, so in the fall, we'll begin writing. We've already begun writing, but we'll become serious about making demos. The idea is to have new music next year."

ANIMALS AS LEADERS' next album will be the follow-up to their 2016 release, "The Madness Of Many". The group has spent much of 2019 celebrating the 10th anniversary of its self-titled debut album by performing the record live in its entirety.