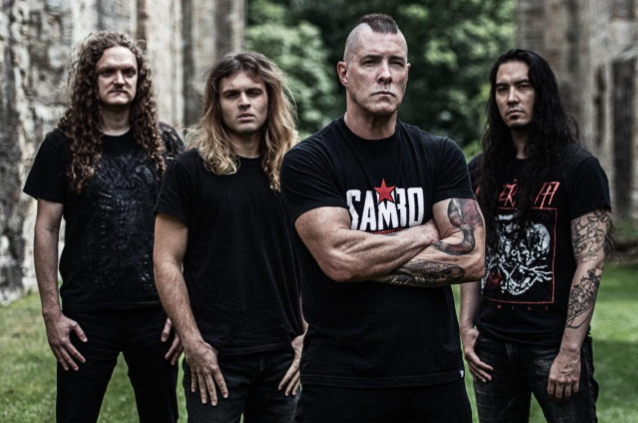 "Psycho Ward", the new video from Canadian thrash metal veterans ANNIHILATOR, can be seen below. The thought-provoking track centered on domestic violence is taken from the band's upcoming album, "Ballistic, Sadistic", due on January 24, 2020 via Silver Lining Music.

Founding guitarist, vocalist, producer and principal songwriter Jeff Waters states about the song: "'Psycho Ward' takes us back to the musical vibe of 'Never, Neverland''s 'Stonewall' but with a drastically different lyrical theme: domestic violence and abuse. I've written quite a few songs on this subject since the '90s. But this song is the perfect combination of 'old-school' metal meeting the right lyrical and vocal delivery to get the point across. Enjoy, 'old-school' metal fans. Welcome, the new!"

Cited by bands in the likes of MEGADETH, PANTERA, DREAM THEATER, CHILDREN OF BODOM, LAMB OF GOD, OPETH, TRIVIUM and many, many more as having some influence on their music, Waters and his bandmates have continued to tour the world year after year while consistently putting out high-quality "true metal" music.

Written, performed, engineered and produced by none other than Waters himself, "Ballistic, Sadistic" was recorded at the brand new, state-of-the-art Watersound Studios UK in Durham earlier this year.

Waters says: "Almost every artist initially loves the songs they create. They are like your babies. In my case, it is difficult to be the main writer/producer and stay fresh, come up with new ideas or make old ones better and I am well aware of that. Since 'we' love what we do, we can be blinded to just how good or bad a song or record really is. Time will tell. Press, fans, band members, label, etc., they ALL will tell you what they think and, in their own ways, they are usually right. In this case, I throw that nonsense in the garbage and can tell you that we have made a record that is angry, technical, back to the first three records vibes and it is going to be difficult to continue writing another record after releasing this one. Best record I've made since 2005's 'Schizo Deluxe' and I think many will argue that this new one is in the top three. From the 'Stonewall'-esque track 'Psycho Ward' to the haunting 'I Am Warfare', the pissed-off 'The Attitude' to the aggression and old-school technicality of 'Out With The Garbage', the record is like this: take the 'Alice', 'Neverland' and 'Set The World On Fire' records, make them angry, combine the old-school production with modern high-tech studio gear, then add the best guitar work I didn't know I still had in me, and you've got the best we could possibly offer. I honestly cannot wait for everyone to hear this."