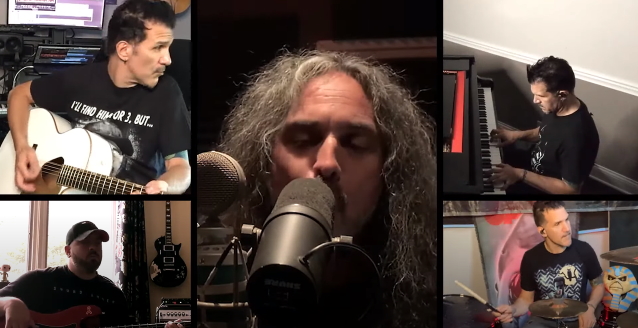 ANTHRAX drummer Charlie Benante has teamed up with DEATH ANGEL singer Mark Osegueda and METAL ALLEGIANCE bassist Mark Menghi to record a cover version of MOTHER LOVE BONE's "Chloe Dancer/Crown Of Thorns", filmed while they were in quarantine.

Benante uploaded a video of the performance to his YouTube channel, writing in an accompanying message: "What if? I always ask that when I listen to MOTHER LOVE BONE, Would Andrew Wood have sung 'Release' or 'Why go'? Would that TEN album have been the next MLB album?

"I remember sitting in Lonn Friend's @instadude74 office when he got the Call that Andrew Wood had Died. I couldn't believe it, WTF?? I thought that band was going to have a long career...well some of them did.

"What A great album; to this day it's one of my favorites. The Chloe/Crown Of Thorns song is a stand out, it's so perfect.

"A few years ago I did a version of Chloe Dancer with Mark Osegueda @bonsloth and Mark Menghi @markmenghi at a @metalallegiance show. I think they both capture the feel and emotion on this song .

"I always thought I never really finished or felt fulfilled and I wanted to do a better cover of it. Since I've been doing these jams this song has always been on my mind. I get goosebumps when I play it, it's weird and emotional.