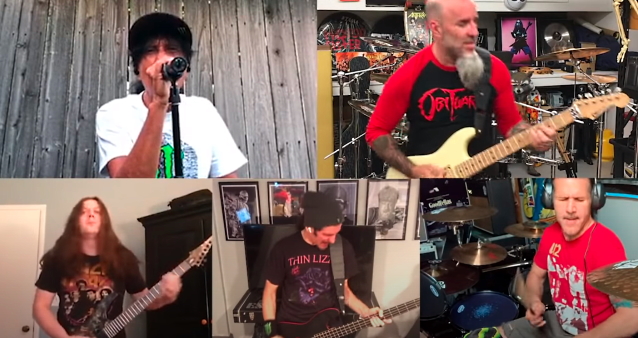 In celebration of the 35th anniversary of the release of ANTHRAX's second studio LP, "Spreading The Disease", the five members of the band recently came together to record a quarantine version of the album track "Gung-Ho".

Drummer Charlie Benante uploaded the video to his YouTube channel and wrote in an accompanying message: "In honor of Our Spreading the Disease album having a Birthday, we decided to Thrash this one out. Hope ya dig it!"

Produced by ANTHRAX with Carl Canedy, the 44-minute "Spreading The Disease" marked the first ANTHRAX album to feature singer Joey Belladonna and bassist Frank Bello (joining drummer Benante and guitarists Dan Spitz and Scott Ian), and set into motion the core elements that would become the essence of ANTHRAX. In addition, the album also introduced the ANTHRAX writing partnership of Benante and Ian (that eventually evolved into Benante, Ian and Bello).