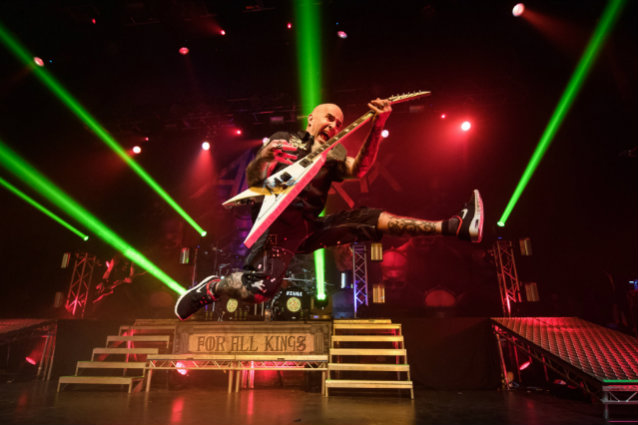 ANTHRAX Guitarist To Release 'Access All Areas: Stories From A Hard Rock Life' Book In December

ANTHRAX guitarist Scott Ian will release his second book, "Access All Areas: Stories From A Hard Rock Life", on December 12 via Da Capo Press. Ian collects all of his craziest hard rock stories into one balls-to-the-wall volume. "Access All Areas" has tales of humor, excess, fun, debauchery, food, booze, and mayhem from Scott's many years on the road as well as his encounters with celebrities like "Dimebag" Darrell Abbott (PANTERA),Trent Reznor (NINE INCH NAILS),Madonna, Lemmy Kilmister (MOTÖRHEAD),John Carpenter, Robert Trujillo (METALLICA),SLAYER, David Lee Roth, and many more.

In recent years, Ian's "Speaking Words" club tours have drawn a devoted crowd of metal fans who love a good rock story. Ian has perfected his delivery, comic timing, and ability to highlight where the ridiculous meets the sublime. Best of all, Ian seems to lack the ability to be embarrassed, rendering "Access All Areas" howlingly funny, self-deprecating, and every bit as brash and brazen as one would expect from one of the original architects of speed metal.

Ian told Ultimate Classic Rock last December that the follow-up to his 2014 autobiography, "I'm The Man: The Story Of That Guy From Anthrax", would include "all stories that didn't fit into the flow of the first book. The first book is an autobiography and, at least for me, there's a certain flow to that and the way I wanted the story to move along at a really quick pace," he said. "There's just a lot of stories I had written that just really didn't fit into it — not because they were to tangential, but because I felt they were kind of taking you away from the path a little bit too much. That's where I ended up with a whole list of really great tales that just didn't work in the first book, but in a book full of stories? They're gonna be great."

Ian added that "writing is pretty much my favorite thing to be able to do. But I'd like to write more, whether it be for comics or movies. It's not something I've gone out and pitched myself for at all, because I just don't have the time now. Maybe when I do have the time I'll have honed my abilities a bit more, and maybe I'll have an idea to go pitch to somebody."

"I'm The Man: The Story Of That Guy From Anthrax" was released in October 2014 via Da Capo Press.

ANTHRAX is continuing to tour in support of its latest album, "For All Kings", which was released in February 2016.