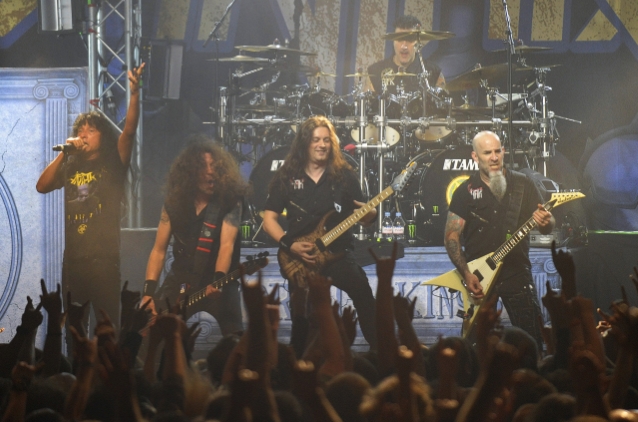 ANTHRAX performed the song "Now It's Dark" for the first time in more than 27 years on June 8 at Batschkapp in Frankfurt, Germany. The band played it again the following night at the Rock Hard Festival in Gelsenkirchen, Germany.

Speaking to Rock Hard magazine, ANTHRAX guitarist Scott Ian said that "it felt great" to perform "Now It's Dark" again after all this time. "I'll be honest — I was nervous," he admitted. "We didn't rehearse it. We played it one time at soundcheck, and it felt really good at soundcheck. Everybody learned it at home before we came out. I think everyone was just very excited to bring that song back. And then during the show, it was my favorite song of the night. So, yeah, I was very, very happy with it. It was cool. It felt like a new song. Like, 'Wow! We have this new song to play now.' So who knows? Maybe that opens the door for other old songs that we didn't think we would maybe bring back. Although we've been talking about some other songs off of 'Persistence [Of Time]' — certainly maybe next year, because it'll be the 30th anniversary of that album. I don't think we'll play the whole album or anything like that, but there's other songs we haven't played in a long time that would be cool to bring back. But yeah, 'Now It's Dark' was great."

"Now It's Dark" originally appeared on ANTHRAX's fourth studio album, "State Of Euphoria", which was reissued last October as a 30th-anniversary, 2CD deluxe edition. The LP, which was produced by ANTHRAX and Mark Dodson, includes fan favorites "Antisocial" and "Be All, End All", and was certified gold a few months after release.

Ian also talked to Rock Hard about the progress of the songwriting sessions for ANTHRAX's follow-up to 2016's "For All Kings" album. He said: "It's still very skeletal. But we have some really strong skeletons. Like, not shitty skeletons — really strong skeletons with flaming swords, like from an old Sinbad movie or something. Yeah, we've got some really cool stuff. I think there's five now really great ideas — just music; musical arrangements. I haven't even really given it any thought yet. Probably after this summer's done, like when we finish in August, we'll have some time in late August and in September where we're gonna be off tour, and I think that's probably when I'll start thinking about what I wanna say. But I'm really, really happy with the music. It sounds great. The riffs are fucking awesome. And yeah, I'm really excited about it."

"For All Kings" was called by some critics ANTHRAX's strongest album to date. Its arrival followed a five-year period during which the band experienced a rebirth of sorts, beginning with ANTHRAX's inclusion on the 2010 "Big Four" tour with METALLICA, SLAYER and MEGADETH, and continuing with the 2011 release of comeback LP "Worship Music".

The group's upcoming disc will be ANTHRAX's third full-length release since the return of singer Joey Belladonna, who came back into the fold for the "Big Four" shows, in the process helping inspire a new wave of creativity.