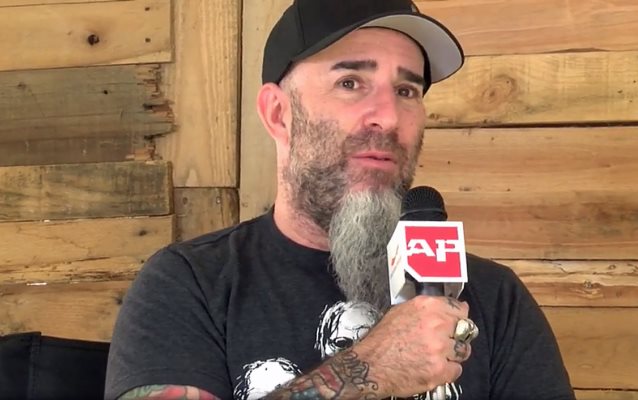 ANTHRAX's SCOTT IAN Has Changed His Tune About SPOTIFY: 'It's The Best Thing Ever'

Scott Ian says that he has "embraced Spotify" after initially being against the streaming-music service.

Spotify has gotten a lot of criticism for how little it pays artists for their music. Taylor Swift has been one of the most recognizable and vocal artists speaking out against how streaming services treat musical artists.

Last year, the ANTHRAX guitarist joined Swift in speaking out against Spotify when he said that "we should be being paid more for our streams" and claiming that services like Spotify had "really devalued music."

But now, in a brand new interview with Alternative Press conducted at this weekend's Aftershock festival in Sacramento, California, Ian revealed that he has changed his mind about Spotify, calling the streaming-music service "the best thing ever."

Asked for his opinion on the different ways people consume music in 2016, Ian said: "I don't care how people get their music — I don't care — as long as they're not stealing it. So, really, it doesn't matter to me if you're listening to vinyl or you're streaming; I don't care. I'm not one of these people anymore that is against technology or the future. I was [against it] until I found out how our deal actually worked with things like Spotify. I was actually criticizing out of ignorance about two years ago. And then I learned how things were working specifically for us. I don't know how it works for every band, but I got educated and I embraced Spotify big time after that."

He continued: "I look at it this way: as long as a band is getting paid for what they do, I don't care how people get their music; it doesn't matter to me… however you enjoy it. At home now, I'm pretty much… We have music on… If we're awake, there's music on in the house, and it's generally Spotify through out Sonos system, so you've got music in every room, and it's Spotify, so you can hear whatever you want at any given time, because it has everything. It's the greatest. [Laughs] Oh my God! It's the best thing ever."

Ian chastised fans last year for not buying music in greater quantities, explaining that "albums couldn't be cheaper. You could buy a brand new album, let's say on iTunes, you could buy a brand new CD for ten dollars. I mean, it wasn't that long ago where you had to go to, let's say, Virgin Megastore, which used to be everywhere. Albums back then in the States, a brand new CD would cost you at least seventeen dollars. That's not even including the gas to get there in your car, paying for parking sometimes. Now you could just sit at home and pay ten dollars. It's never been cheaper, and people still have a problem with that, apparently, because they'd rather steal it or stream it."

He added that while he thought the "streaming model" was "definitely cool," he hoped that "it could get sorted out for bands where bands are getting more than their share that they're getting now, let's put it that way — more of a fair share of the cut, anyway. Because I think streaming is a good model; it just… the business end of it, I think, needs to be worked out."