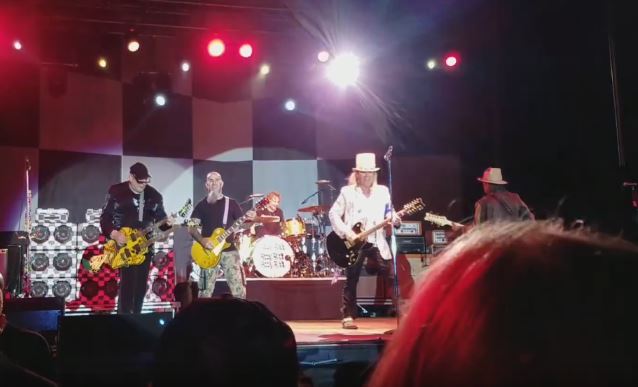 ANTHRAX guitarist Scott Ian got to live out a dream this past Saturday, October 1 when he joined CHEAP TRICK on stage at the at the Louder Than Life festival in Lousville, Kentucky to perform the latter band's song "Auf Wiedersehen". Video footage of his appearance can be seen below.

"We were toying around with the idea of doing a CHEAP TRICK song, and 'Big Eyes' was one of our favorites," ANTHRAX drummer Charlie Benante stated at the time of the EP's release. "We recorded it, but then got busy with other things, so we never finished it. What happened was, Joey [Belladonna] was out in L.A. doing vocals for the EP and Jay Ruston [co-producer] pulled 'Big Eyes' up and had Joey do the vocals, something we didn't know he was going to do. But it turned out so great. Joey's vocals are so amazing, so we knew we wanted the song on the EP. After Joey's vocals, all the song needed was a guitar lead, and I did that in my Chicago studio. I think the song turned out to be one of the best songs on the EP.

ANTHRAX is continuing to tour in support of its latest album, "For All Kings", which sold 34,000 copies in the United States in its first week of release to land at position No. 9 on The Billboard 200 chart.