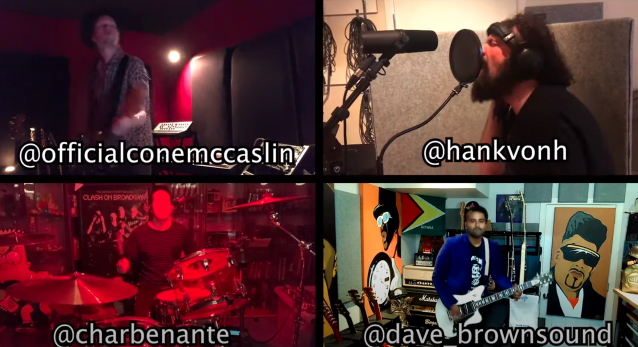 Benante uploaded a video of the performance to his YouTube channel, writing in an accompanying message: "When I was younger, I would sometimes go to work with my sister, who was a hairdresser in Manhattan. Below the salon was a record store called Disco Mat that I LOVED. I would spend hours in there and one day, I had a weird experience. I was in there going through records and I saw a man with a long coat and a beret looking through the bins. I knew it was Johnny Rotten because I was a huge SEX PISTOLS fan. I walked over to him all excited and he turned and put his finger up to his mouth and went 'Shhhhhhhhhhhhh' as in 'STOP'. I took that as a leave me alone and that's what I did. I continued to look around and then I saw him checking out and he called me over. I told him how much I loved the PISTOLS and he said that was all behind him and he was moving on. He took a Disco Mat card, turned it over and signed it for me. He talked a bit more and then left. The thing he was moving onto was PUBLIC IMAGE LTD.

"I love love love First Issue, it still makes me happy when I hear it.

"I was so happy Dave and Cone from SUM 41 were into doing this with me and when Dave mentioned having Hank Von Hell on it I was like WOOOOOOO HOOOOOOO! I love TURBONEGRO.